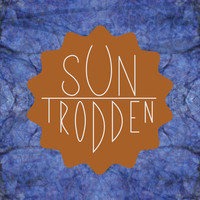 Suntrodden is a band from Atlanta Georgia comprised of Erik Stephansson and all of his talent. He created Suntrodden after visiting a record shop around 2000 and heard music there that felt dreamy, strange and beautiful and says he has been chasing that feeling ever since. Well I think he nailed it when creating this newest edition in the Suntrodden Trilogy, Suntrodden III (The first two albums are named Suntrodden I and Suntrodden II ).

All of the songs are very easy listening and would be defined as indie pop or what us 70’s kids used to call folk music. If I had to compare it to something else the closest thing that comes to mind would be Terry Jacks with “Seasons in the Sun”. This album was beautifully arranged and there was very minimal editing. No virtual instruments! Stephansson plays all of his own instruments, Erik seems to be a naturalist and wants the songs to feel very natural which you get the feeling for with the unplugged guitar and piano with some moments of tambourine. The song lyrics are sung very softly and beautifully while being filled with positive sentiment and life reflection. While at first listen the songs seem simple enough with what seems to be a simple sound but the lyrics are pretty deep after listening to the record a few times. You can almost see the people he sings about barefoot and dancing in the grass under the shining sun.

Starting with the first song on this album There’s a Place; it speaks of a place beyond time where we leave our pain behind and lose ourselves. This song has a sort of soft trippy sound and I cannot speak for the artist but seems to be speaking of meditation perhaps? The second song on this record is Pure; this song is a little more upbeat musically and has more tambourine in it. The lyrics speak of staying pure and basically how we never were pure in the first place. Song three on this record is called Moonflower; it starts with more definitive piano than the first 2 songs and speaks about life choices and who you would be without the person you are with. The second to last song is Never Again; “never say never again” is the chorus of this song and what this listener has taken away from the lyrics in this song is that life is short and perspective comes into play when you say never again. Life changes, people change so never saying never again leaves more doors and ideas open to you when your perspective in life changes. The last song on the album is The End (Haunt Me); this song starts off faster than any other song on this album. It does start to take on a sort of haunting sound throughout. This song is all instrumental and the volume is gradient throughout the song. You will hear a little more distortion toward the end of this song that you do not find anywhere else on this album. If you like to try out different music than what you are used to and want something you can listen to in the background without getting too distracted this would be the album to get.