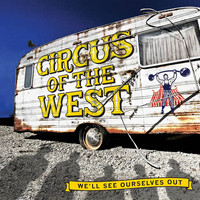 With their signature bright sound, Circus of the West has released a wonderful single entitled “Boxes”. The Minneapolis based band is comprised of Edwin Caldie (vocals, keys), Joel Leviton (guitar), Ben Court (lead guitar), Jason Kapel (bass, keys), and Alan Einisman (drums). Their sound bounces between indie/alternative pop and rock, usually meeting in the middle to make toe-tapping songs that will be sure to brighten your mood.

“Boxes” starts out soft with the acoustic guitar before the other instruments come in, along with Caldie’s voice. His vocals are crisp and and perfectly suited for the band. The lyrics get right to the point. It’s about how we as people have come to be too comfortable with only what we know, and that we no longer move out of our comfort zones and turn away from the unknown. While I don’t completely agree with the message, they lyrics are certainly persuasive.

Full of optimism for the future and the promise of a new start, “Boxes” is an anthem for self-improvement and taking chances. The song goes into a crescendo a little over halfway into the song and it pumps you up with the repeated lyric, “There’s got to be another way!” Even if you’re an adventurous sort already, this song will lead you to want to push past the limits.

Court and Leviton command the melody with their guitar work, setting the bright tone. The drums, keys, and base provide a steady and delightful base for the guitars and the vocals. It’s a song you can sway and tap your foot to and, once you know the lyrics, belt it out with just as much passion that Caldie has- it’s infectious, the mood of this tune. I keep going on about the lyrics, but I can’t get over how great they are! You should definitely pay attention to each word when you listen, they aren’t something you should coast over (not that you can, as the music doesn’t drown Caldie out).

Circus of the West’s debut album, We’ll See Ourselves Out, features a spectrum of varying sounds and you get the sense that they’re experimenting with various sounds. “Boxes” is my favorite song on the album, with every component coming together in an irresistible song. Lyrics in the album range from cautiously optimistic to your usual sad song with a misleading melody (a personal favorite). Not a lot of bands come out of the gates swinging with a killer debut, but the Minneapolis locals are a different story.

“Boxes” sold me for Circus of the West and I can’t wait to see what else they come out with. Old and new listeners alike are sure to enjoy their music. Still a relatively new group, they’re exploring their sounds and the direction they’re going to go in for the long run. Nothing excites me more than musicians experimenting and coming into their own unique sound, and I think a lot of people feel the same way. Circus of the West has a new fan after today, that’s for sure.