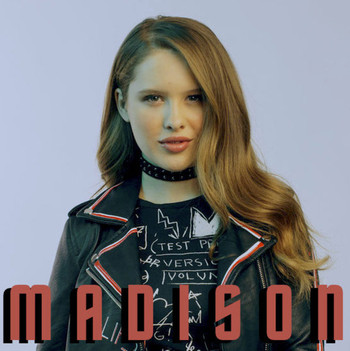 Irresistible new teen sensation Madison McWilliams has released her self-titled debut ep today, Friday, June 23rd. The official release from the proud Austin native is now available on all digital platforms. Following the release of the ep Madison will also premiere a new video for her first single “Melodramatic” on Vevo/YouTube Monday June 26th 9AM est. Recently called “Pop Music’s Latest Darling,” by top lifestyle Austin journal, Tribeza Magazine, Madison performed her latest single “Fighter,” on WFAA ABC 8/ Good Morning Texas as part of the 15-year-old’s launch week. In addition, fans were given the opportunity to get “Fighter,” with advance purchase of the ep. Madison will also be featured in a upcoming issue Austin Monthly Magazine.

Recently appointed an official Ambassador for Make-A-Wish® Central and South Texas, the gifted singer/songwriter/musician also performed her poignant and inspirational original song “Fighter,” live, on KENS 5/Great Day San Antonio in support of the MAW Over the Edge campaign, taking place in Madison’s home town of Austin. “I am honored and humbled to support these tremendously brave and strong individuals and look forward to giving my all to the mission of Make-A-Wish®!” Madison stated.