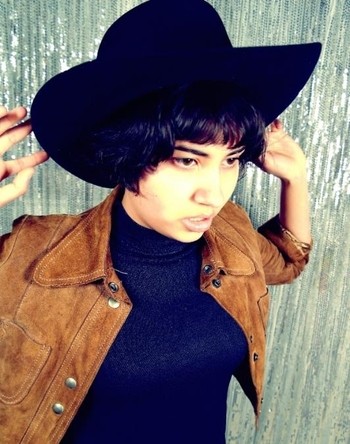 Saba Lou was born in the year 2000 in Kassel, Germany. She moved to Berlin with her family in 2005. She began her recording career at the age of 6, putting out a 4 song 7-inch on Atlanta’s Slaughterhaus/Rob’s House Records. At the age of 8 she recorded “Good Habits (and Bad)” which was then used for the end credits on Cartoon Network’s “Clarence” t.v. show. The song was also released in 2012 on the “Until The End” 7-inch on Seth Bogart’s (aka Hunx) label Wacky Wacko records.

Saba Lou recorded her debut album Planet Enigma at the age of fifteen. Ryan Sambol, of The Strange Boys, makes a guest appearance on “Our Fate”. Erin Wood from The Spits also sings back ups and provides some space synth on Planet Enigma.

The album was recorded at Moon Studios, Berlin in late 2015- early 2016. Saba Lou is currently finishing up high school in Berlin. Her hobbies are drawing, collecting records, reading and writing songs.