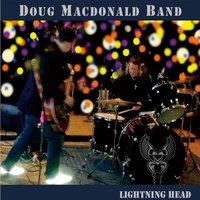 The Doug MacDonald Band infuses a great deal of humor into the shaggy dog stories of “Lightning Head”. Narratives are crafted with the utmost of care, for the lyrics possess a great deal of detail, as if these are tales of those who have truly lived. Humor rests at the very heart of these lyrics for they possess a playful quality to them. Perfectly adorning these lyrics are the giddy instruments, from the loose rhythm section to the garage rock summery tones that define the guitar work.

Bursting at the seams is the groove of “Atomic Phunk” which opens the album with true style. Shouted lyrics give the song a sense of urgency and chaos. A glorious rush of cymbal crashes and hysterical vocals grace “Drawbridge Troll”. Tenderness pours out of the askew structure of “Mallory”. On “Downtown Crossing” the Doug MacDonald Band slows things down a bit, opting for a more introspective approach. Giddy tempos lead the way on the exuberant “Jason’s Record Store”. Laid back and reminiscent of the Meat Puppet’s mellowed early works is the reflective “Silent Alert”. Sly guitar works wonders on the limber “Lights On”. Crazed guitar riffs touch upon surf rock with the dazed “Shark Attack”. With “Open Window” the Doug MacDonald Band ends the album with so much energy as they burn through the track length.

Quite infectious and infinitely catchy, the Doug MacDonald Band creates a vibrant series of colorful worlds with the uncanny universe of “Lightning Head”.