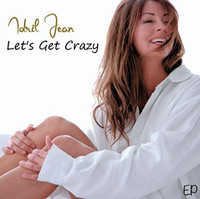 Pop rock being your main genre approach with influences taken from country, blues, and folk music, does it make a sound? Why yes it does in the form of Idril Jean’s latest EP release “Let’s Get Crazy”. A 6-track EP with the title track “Let’s Get Crazy”, taking the lead as not just a leading single made from a song, but the opener of the EP itself.

“Let’s Get Crazy”, as a song by itself is quite interesting to say the least. Idril’s vocal chords and skills are right there literally. While the music itself is paced as that pop rock genre, with the energy placed front and center, while the song is more directed as being a country influenced track just too much at times. Which is not a bad or good thing but a somewhere in the middle thing really. Moving away from the leading track comes “At The Top”, another track consisting of that pop rock feel, but there is a lot more country and folk music thrown in. The vocal chords on the other hand are not right there in your face, but feel more like they are gliding along the top of the music being played. Hand in hand both music and vocals work well together, sounding decent enough, but still takes on that country folk feel than the claimed pop rock.

“Give My Your Hand”, “That’s It”, as well as the rest of the EP’s tracks end up sounding so much alike it is difficult to tell which is which. Each of these tracks starts off differently at first glance but then rounds off to being just like the others. While this does make the music more noticeable it does not have it develop into being its own thing. Like take “So Listen To Me”, the song sounds different from the others but yet the others most of them sound a lot alike which sounds bland and boring. “So Listen To Me”, is one of the tracks that tends to stand out more so than the others. If not that, then this song may just be the only one to truly do such a thing really.

“Tell Me Why”, ends up being another one of the other tracks to not sound like the others just as “So Listen To Me”, was like. Except this one sounds more like a ballad pop rock styled song, which is nice in a good way. It’s a change of pace, that has the music being more open and creative from all sides. The vocals and instrumentals working with one another, to allow these tracks to sound impressive and flawless.

When it comes down to Idril Jean’s EP “Let’s Get Crazy”, it’s a pop rock based release, with more influences taken from the country side than the pop rock side. It allows for this release to sound decent at times, but could be so much better if a lot of the songs sounded more like the ones at the end of the EP, than at the start of the EP.