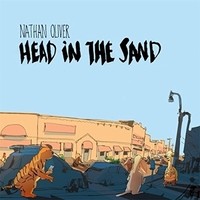 The six songs on Nathan Oliver’s EP Head in the Sand marks the first release from this outfit since 2009’s Cloud Animals, but there’s no discernible loss of creative momentum. Bandleader and musical mastermind Nathan White has enlisted the services of respected musicians like drummer Robert Biggers and bassist Duncan Webster to realize the artistic ambitions lurking just beneath the surface of each song. His complete immersion in alt rock sounds includes the typical array of atmospheric guitar heroics, melodic inventiveness, intelligence, and boisterous attitude, but there’s no self-indulgence or wont for imitation bleeding through in these compositions. Head in the Sand might be a relatively brief recording, but it should go far in re-establishing the band’s presence on the indie scene and laying the groundwork for future live shows and recording. It couldn’t possibly have a better presentation; producer Alex Malolo has framed these six songs with a balanced sonic treatment that any band, any genre, would envy.

Biggers’ romping drums and Webster’s sternum vibrating bass kick open the door for this EP. The opening track has a smattering of electronic sounds mixed into the fray, but largely devotes itself to rampaging post-punk furies seemingly poised to run off the rails at any given moment. It manages to hold together, kick the ever loving hell out of listeners, and get out before testing even a thread of the audience’s patience. The second song “Clean Sheets” abandons the hell bent passions of the first in favor of a jauntier, poppy approach. Biggers and Webster take a much more restrained approach with this performance and White’s guitar comes more to the fore. It has a much cleaner sound here than on the first song and a persistent bounce. Nathan Oliver achieves a relatively surprising cinematic quality with the opening of “Little Belle” – the big, slightly jangling electric guitar chords set the scene nicely. Those qualities are somewhat tempered as the song continues, but the performance never dips in merit and White delivers a lights out vocal touched with just the right emotional notes.

“The Exquisite Wait” revisits some of the same firepower Oliver summoned in the opener, but it is presented a much more considered manner than before. Lacking the same rambunctious edge as the aforementioned tune isn’t any slight however – it just illustrates yet another facet of Oliver’s post-punk attack. Webster’s melodic bass opens the fifth song “Sing Blue Silver” in quite a memorable fashion before the drums kick in and the song properly takes shape. White’s guitars have a lot of the same clarity we heard in the earlier track “Open Sheets” but follow a much straighter line than the earlier number. The finale “kim Mi Young” embraces acoustic sounds over the EP’s predominantly electric guitar fare. Beyond double tracking his vocals, White opts to not adorn the opening of this song with any added effects and it makes for a strong introduction. He adds more as the song progresses and shows a tremendous understanding of dynamics and timing alike. The assertive Neil Young-esque electric guitar in the song’s second half is its crowning achievement. This outstrips the previous efforts from this project and points to a bold new dawn for Nathan White’s songwriting and recording career.