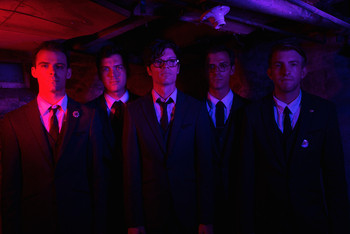 The track, described by Glide Magazine as an “energetic romp exploding with garage rock riffs and boogie boogie piano”, is the latest single from The Dull Blue Lights’ upcoming self-titled debut album, due out July 13th— Fun fact: it was produced by Andrija Tokic (Alabama Shakes, Hurray for the Riff Raff, Benjamin Booker, Clear Plastic Masks)!

The Dull Blue Lights are a band in between. Drawing from influences as varied as Motown soul, Nuggets psychedelia, and Jamaican rocksteady, the Philadelphia-based group’s definitive blend of cascading harmonies, screaming guitars and relentlessly grooving rhythms lives somewhere between each one. The band calls this in-between sound Basement Soul. “We acknowledge that genre exists, but have no interest in confining ourselves to being just a soul band, or a mod band, or a reggae band, and on and on,” lead vocalist/guitarist, Todd Fausnacht, explains. For the band, any type of music they enjoy can become part of the Dull Blue Lights Sound. “For us personally, coming from a scene full of vintage throwback bands, it’s a refreshing change.”