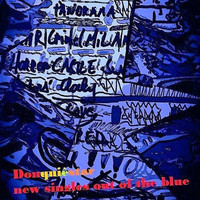 Never learning music through any traditional training, Donquièstar still found his way to it as a young child. From there the love for sound grew well into adulthood when he went on to release his debut in 2009. Several years later as electronic continued to grow in popularity, he was still riding high on his latest release Half Heroic Zero Point. Released February 7, 2017, Half Heroic Zero Point features 12 songs that showcase not only the power of electronic but a cascade of other genres as well. From punk rock to psychedelic, songs like “Mox Box,” “Melvin’s Choice,” and “Jammin’ Endocrysos” really capture the essence of who Donquièstar is as an artist; authentic. This is an electronic album of colossal proportion that makes you wonder why this type of music isn’t more popular. It has something for everyone, even if they don’t do electronica. I haven’t heard such an artist pull it off this well in a long time. It makes me realize there is either a lot more out there to be heard that the masses should be onto, or it is a limited genre and always will be. But either way it is fantastic. It hit me out of left field from the get go. Half Heroic Zero Point showcases singles “Out Of The Blue” and “Half Heroic Point Zero” but everything on it could be a single.

As a reviewer, it’s hard to place yourself in any given genre’s backyard just to give an opinion about it. But if you go back to the pioneers of electronica you can identify with what most of them are still about. And this isn’t the best there ever has been, but certainly not the worst either. The album kicks off with “A Day Away The Night Okay” and it’s a solid entry to rock things off. With big beats being the obvious idea, but a nice creeping rhythm backs this up and it’s full of hypnotic twists and turns. It cooks along life fire and brimstone with flashes of orchestration before it drops with a booming sound that outs you in a trance. This is followed by “Mox Box” with its much higher energy and what sounds a lot like it follows the vocal melody of “Dance Hall Days” by Men Without Hats. Perhaps they are sampling it, I do not know but this is very cool and would be excellent in a video game. It is one of the bigger numbers on the album. Next up is “Cold Carnaval Gotic XI” with its travelling beat that gets you feeling like you could be anywhere from a long desert road to dancing at a rave at four in the morning. It carries enough to entertain in just about any environment, where other such music would be deemed inappropriate. But not this.

Other tracks go where no other has gone before with “Jack Huslte’s Sixth Dream” standing out the most as it draws you and doesn’t let you go, with its very suspenseful driven beat that almost makes you feel like you’re in a tunnel, driving with no place to go. And then there’s “Melvin’s Choice” which has an impressive percussive groove that takes it over the top. This would also be great movie soundtrack material. And the even crazier “Weird Zeince” which goes all over the place and back with layer after layer of killer synth effects. These tracks all have something to offer, including the final cut, “Silverchills.” If you’re into electronica and Techno thrash music, look no further than Donquièstar.