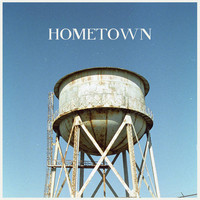 Nostalgia has always been around for as far back as time can possibly go. But as of lately it seems as if the late 2000’s i.e. 2010-2017 present day time frame seems to bring out that nostalgia feel more so than normal. It being tossed around in different forms of media ranging from TV, film, music, literature in regards to books, comics, Japanese manga and anime even. It can be found so much so but what is it about nostalgia that keeps it so fresh and alive. Well for the likes of Dru Cutler his latest release an EP called “Hometown”, is filled to capacity with nostalgia at least for him.

How so exactly, well “Hometown” not just the title of the EP release but one of two tracks off this release. “Hometown”, kicking things off for one, it being a real rock n’ roll nod to all the places we grew up, whether that’d be a place we still stay or a former place it is where it all started pretty much. Dru Cutler’s says that the song “Hometown”, is best described as “One part love song for the suburbs with lyrics like “That’s where I once lived that brick house beneath the weeping willow”. While the other part is the bittersweet goodbye to the days of our youth”. Could not be better said then that I think.

“Hometown”. as a song itself though, is another one of those tracks that ends up being catchy and upbeat. Except this song really brings out the music aspect, combining acoustic guitars, piano work, drum solos, electric guitar, with such stunning vocal chords it makes the song more out spoken than you could possibly think of it to go. While the other track “Infinite Moons”, off this same EP release, is more toned down, it brings the music to a low point than its previous high point. This track being one of those you could just wave your lighter too, if not just sway yourself from side to side, is the feel that it gives off.

Dru Cutler’s style has been described as Ryan Adams meets Pink Floyd, which makes sense at least. Pink Floyd’s essence not so much but bits and pieces, whereas the Ryan Adams appeal is front and center. So if you were wondering just how this guy sounds, those are some acts you could compare his style similarities too. If not that, then take country music, meets pop music with some added effectiveness of rock music, that is what Dru Culter’s style is all at once really.

Believe it or not this EP “Hometown”, was recorded in Dru Cutler’s original hometown Tampa and current home sake Brooklyn. He says that this release and its song of the same name is a musical symbol of his past and present. Which is truly is when you think and listen to this release by him. He is pulling aspects from his previous life into his current life through his ways with music. That is both creative, interesting, and powerful source material right there.