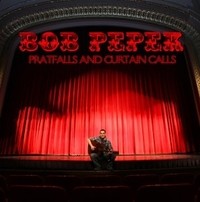 It depends on who you ask, but there are some who like and dislike the taste of sour in their mouth. But in the case of a lemon it is a hit or miss but if it’s lemonade well everyone partakes in that fun tasting drink. Where does all of this sour and lemon small talk come from well Bob Pepek of course. He put it as a part of his musical genre description upon his social web of sorts. He says that his music is “acoustic rock with a twist of lemon” so get it now? If not well perhaps you may need to re-read this intro to get the idea of it.

In any case here is a rundown of who Bob Pepek is for those who may not be aware. Bob a singer, song writer, performer of sorts, had released his debut full-length EP release “From the Let Go” back in 2009, had gained quite the following with excitement with his array of fans. He would create a new found sound that he would call his own, gaining interest from all over the world. After this release he went on to start off playing local small coffee shops, later on gradually moving into the opening slot for various gigs being support if not opener for some national acts like Amie Miriello, Black47, and Julia Nunes.

While he did create a style he called his own. He was quickly noticed for said style and sound, as it was a truly unique style that he had brought into the music scene and his popularity continued to grow more so than before. This would cause his confidence to grow and his style he had created to develop and grow ever so further as well. This all lead to a more loyal following, growing more so to have him become a popular local to hit the music scene that was in New England at the time.

While he continued to grow within New England that is not where he would make it big becoming one of the brightest stars destined for great things thanks to New England oh no. His performing would take him from coast to coast causing him the ability to reach out to a more wider audience. His music can be heard currently on over a dozen indie films in the U.S. of A as well as Canada, along with the usual streaming services like Amazon, iTunes, Spotify, Napster, last.fm, CDBaby.com and even Rhapsody etc.

But enough about all of his past life, his present life is where it is at and where he is as a person because it is what he is and who he is as a whole. In this case bring his continued growth as a personal and his musical abilities with creation which has lead him to release more material his single called “Down Here” released in 2015. While that single may have taken 6 years to come out as far as newer material, Bob spent quite some time promoting his debut efforts so that did take up some time frame if you will. But good things, come to those who wait, as that saying goes, for those who believe in it that is. But just two years after the release of that single, Bob would release his first debut full-length album titled “Pratfalls and Curtain Calls”.

A 10-track release of rock based tunes, that stay true to his classic beginning’s except this time around it resembles that to his last single “Down Here”, keeping a more modernized feel and vibe to it. Like take such songs as “Take Me For Me”, “Shattering the Mold”, “Out Loud”, “Missing You”, and “Ship Me Away”, you’re getting quite the variety right here already. Each of these is of course his unique style source, of rock mixed with acoustic formula except again it is more modern day based, allowing it to sound fresh and more original if you will. For instance “Out Loud” and “Take Me For Me”, both are played back to back just switched the other way in the track listing, and they work well together played this way because one is very heartfelt while the other is emotionally driven with such movement to the track it is very comforting to the ear.

The other noted tracks like “Shattering the Mold”, and “Missing You”, are somewhat the same, one is more upbeat having a sort of heavier aspect while the other is more toned down aspect less heavy but more softer progressive going for it. It has both of the tracks working well together either way giving you a different side and feel for each of the songs expressed.

Now “Ship Me Away”, goes the direction of sounding a lot more over the top, upbeat, catchier and fun to the ear. The music just pops out more so than the rest of the songs listed or offered off this album. That’s what makes Bob Pepek so interesting and a talent at music creation he is able to get those feels jumping out of you rather than at you.

In regards to his vocal ranges and chords, they are decent sounding, excellent quality, having a high pitched tone where that is needed placed in some tracks off this release. While his vocals placed elsewhere have a joyful and fun spirit when they sing the lyrical context exposed. Speaking of which, the lyrical content is very detailed expressing his personal experiences and what he has gone through as a person, which everyone else on this world can indeed relate too in some way.

As for the music and instrumentals, it is acoustic rock, so you get the acoustic guitar riffs and melodies provided there, with some bass and drums tossed in for good measure, adds more of a overflow effect that brings it altogether in a full streaming effect. Like one of those streams you find in the outdoor nature place that has the never ending water, that is how this music plays out, like a never ending water source if you will.

All in all Bob Pepek has got a style he has called his own for the longest time, and while it has developed over the span of his life and career as a musician, he is able to keep it fresh and alive every time. To simply put it best Skope Magazine had listed him as the “Artist to Watch” back in 09, eight years later, he is still contender for that spot, because there are those out there watching out for this artist, because he is not going away not anytime soon or at all for that matter.