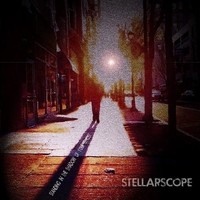 Reveling in a dazed dream world is Stellarscope’s surreal shoegaze of ‘Standing In The Shadow Of Your Ghost”. Sounds move by in a glorious blur. With this powerful sound Stellarscope follow a path forged by new shoegaze groups like Belong. Belong in fact appears to be a particularly good analog to their work: forgoing optimism, these are songs for overcast days. Unlike Belong however Stellarscope possesses a far stronger beat and has a more direct approach, almost flirting with pop-like structures. Guitars add to the overall sea of swirling textures, alongside the commanding vocals that soar up to the heavens.

Wasting no time at all Stellarscope dive deep into the thick of it with “Don’t Belong”. Possessing a punchy dance rhythm is the infectious “capsized” whose late 80s style works wonders. A sly groove takes hold in the glorious buildup that is “Only Strangers Now”. By far the highlight of the album comes at the very heart with the sprawling ambitious “All For You” where Stellarscope create a vast wall of sound, with a melody built deep into the song’s expansive style. Employing a chaotic, careening approach is the crazed spirit of “nothing to me”. Ending the album on a high note is the bombastic blasts of “this is how it ends” with the distortion turned way up as the song’s hyperactivity grows over the course of the track before it ends in a fevered pitch.

On “Standing In The Shadow Of Your Ghost” Stellarscope sculpts a universe whose undeniable appeal is with its uncertain path forward.