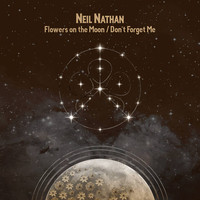 2016 was perhaps one of the deadliest years I can remember. There was a sense of dreadfulness surrounding many of us. In the music world, we kicked it off by losing one of the most inventive and greatest artists the scene ever had: David Bowie. Throughout the year, we lost others like Prince and Leonard Cohen. The good news though, before leaving us they get to influence other talents that have been taking the world by storm as their idols, or they are just waiting on the shadows to shine out – on this later spectrum, we find the star of our review.

Curiously, Neil Nathan’s Flowers of the Moon deals with both themes, as the artist itself explains, “Life is short. Art is Long” That mantra can be felt throughout the record. The vibe of the record takes us back to the late 60s and early 70s when music staples like The Beatles, Bob Dylan and the late Leonard Cohen were taking music to a whole new level, some with their ambitious arrangements but others through simple, somewhat minimalistic music yet thoughtful lyrics that remain in our conscious to this very day.

The album kicks off with “Diamond in the Sky” (a straight-forward homage to the English icons? Maybe.) that basically introduces us to the sound of the whole material. Melodic acoustic guitars blends with Nathan’s somewhat nasal vocals, his voice might not be pitch perfect all the time but if I had to take a wild guess I would say it was all in purpose. “Me and Jim” changes things over a bit by adding this eerie synth sounds in the background that brings back the artist to the days of the 80s and early 90s where the genre eventually known as Alternative was becoming pretty popular. We also finally get to hear Neil’s vocal power as he hits a few big notes towards the end. That song in particular sets a before and after on the album as we leave the 60s ship and from now on, music feels somehow contemporary and Nathan’s tone feels a bit lose and even sassy. The weird effects in the background gives the material a very Genesis-ish vibe that gets under your skin and haunts you down. At the end, the album closes with a song that encapsulates everything we’ve heard til now – as you dive and get lost in the track, it might become your favorite tune of the whole record.

Flowers in the Moon is not a flawless album though. There are few things that lose me, especially at the very beginning. The music was great but it felt so monotone that it bored me a little, everything picks up in the middle and he starts to play and add other instruments which makes the record more interesting – so if you have no patience or you are listening very late at night, you might want to skip the first 5 songs.

Overall, the album is a good album for those who enjoy Folk and Acoustic music. It has some great nods here and there to some of Nathan’s biggest influences. Definitely worth listening.