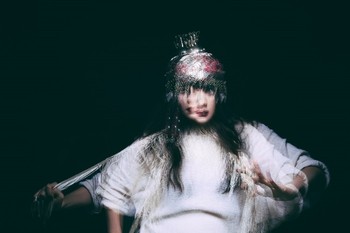 Multi-disciplinary artist, producer, composer and vocalist K Á R Y Y N today unveils her new single ‘Quanta 11: PURGATORY’. The track follows debut release ‘Quanta 1’ comprised of ‘ALEPPO’ and ‘BINARY’, a release that Pitchfork called a “stunning solo debut”. ‘Quanta 11: PURGATORY’ is part one of the second instalment of the Quanta series and is now available to buy and stream on all partners.

Seven years ago, K Á R Y Y N retreated from making music to begin a process of healing. Wrapped in a cocoon and hidden from the artist community, K Á R Y Y N made music only for herself in pursuit of marrying her artistic ideas with personal ideals. Years of evolving as an artist in almost total isolation held K Á R Y Y N in a kind of purgatory, afraid to reveal her work to the world after so much time. This track – the first track written for the project – is a meditation on that fear and an incantation for courage to reveal herself to the world.