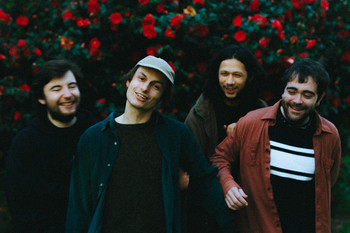 Muskets found their birth in Brighton, UK where they quickly engaged in the city’s always-growing music scene. Here, they connected with like-minded peers who held a shared DIY ethos and influence of grunge, punk and emo sounds, such as Broadbay, The New Tusk and Water Canvas. With these names the band put touring and weekenders in throughout 2014, supported by their ‘Pollyseed’ EP on cassette released through Wake and Don’t Shoot The Messenger.

The following year saw the band change up a gear, putting out a six-track affair titled ‘SPIN’ and released via Venn Records. It was around this time that Muskets garnered the interest of Radio 1’s Daniel P Carter, giving them substantial airplay of singles ‘Tate Modern’, ‘Colourview’ and ‘Drowsy and inviting them to Maida Vale for a live session that elevated the band to heights they had not reached before. Exposure like this also saw the bands touring game level up in parallel and led to UK outings alongside the likes of the more established Moose Blood and Creeper. The last iteration of ‘SPIN’ came with the music video for the EP’s cathartic closer ‘Drowsy’ featuring none other than Matt King AKA Super Hans.