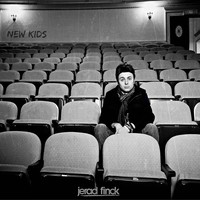 Jerad Finck’s self-titled 2009 debut heralded the arrival of an important young musical voice and his trajectory has been trending upward ever since. Talent, naturally, plays a crucial role in that equation, but there’s a more important quality serving Jerad in good stead during the intervening years between 2009 and now – work ethic. This is a singer and songwriter who seeks out the right collaborators to aid bringing his musical vision to fruition. This is an artist who is willing to log the miles and necessary stage time to polish and hone his act to a bright edge. This is a performer with the wherewithal to enchant a wide cross section of listeners thanks to his unquestionable sincerity and engagement with the audience. It has been a thrilling ride for Finck since he first emerged from his hometown of Spokane, Washington and it is a ride that, on the basis of his latest single “New Kids”, shows no signs of ending.

The song starts with a strong amount of atmosphere. Chiming guitars are wreathed by a tasteful amount of reverb and the percussion dropping in has a similar quality with its patient patterns and just the right amount of tactile snap. The song’s development is equally patient. Melodies emerge from the song rather than sounding composed. It isn’t easy to strike this sort of rich, natural sound where spontaneity prevails over a plotted course – “New Kids”, despite the obvious work put into creating a mood, can pass for a live performance. Finck’s singing, in particular, is a yearning freshness that benefits from an excellent vocal melody and his stylish delivery. Despite the evident amount of style and finesse he brings to the performance, it shares the same attributes of the musical performance and never strikes listeners as inordinately constructed. It is well tailored to the musical arrangement as well insofar as it falls in all the right places, capitalizes on the song’s understated crescendos, and lets the music breathe when it needs too.

The lyrical content is equally well tailored and often quite thoughtful. Much like the music and vocal, the lyrics never waste a single word or lose themselves with unnecessary verbiage. There’s an uniquely musical quality to his choices of syllables, the turns of phrase that transition listeners from one part of the song to the next, and his vocal phrasing helps accentuate this qualities. Finck is a powerful singer, but even the best singers need top shelf material to put over their own talents. “New Kids” doesn’t attempt remaking the wheel, but it is the natural next step in a career full of quantum leaps thus far and clearly signals that the best is still to come for this multi-faceted and profoundly musical talent. Jerad Finck can be rightly called one of the brightest stars working in the indie scene today and his skills are such it is difficult to conceive he’ll be plying his trade in the indie world for much longer.