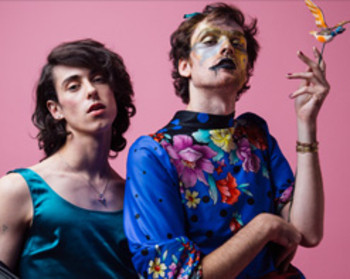 PWR BTTM make music for “the coolest kids in the room”, but these aren’t the typical, mainstream “cool kids”; these are the queers, the weirdos, and the craft-store connoisseurs covered in glitter and rainbow face paint, wearing thrift store dresses several sizes too big. Ben Hopkins, (vocals, guitar, and some drums), and Liv Bruce, (drums) met at Bard College in upstate New York, but moved to Brooklyn after graduation. Brooklyn isn’t a bad place to be because, as Bruce told Out Magazine, when you’re in New York, “no matter what you do, you’re probably not the strangest looking person that someone has seen that day.” In New York these days PWR BTTM are the coolest kids in the room.

In a 2015 interview with Nylon, Bruce said that “songwriting is almost a form of magic, a crystal ball that show you the inside of your brain in flattering lighting and slow motion.” In anticipation of the release of Pageant the band has filled their calendars with both a UK/France tour starting 4/10 and a full US tour beginning on 5/27. Until that time, “Big Beautiful Day” has been a fervent, powerful preview of what fans can expect from Pageant.

The video for “Big Beautiful Day,” released on Valentine’s Day, begins with Hopkins receiving an emoji-filled text from their mom, before Bruce kicks down the door holding a plate stacked with waffles, something a YouTube commenter called “honestly iconic”. We then see the duo alternately playing guitar in a hallway, eating waffles on the couch, and in true PWR BTTM style, covered in face paint and glitter, singing to a room full of kids just like them. It’s a declaration to face both active hate and passive microagressions by being yourself: Hopkins affirms that “my advice is to look incredible as you make their lives regrettable by being your damn self.” The video ends with a grinning, glitter-covered Hopkins biting in to an apple and licking their lips, before a cut back to the aftermath of the party.