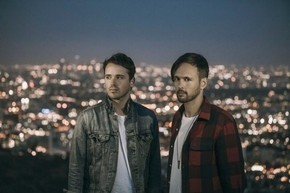 Atlas Genius have today released a remix EP for their single “Molecules,” featuring six new remixes of the track by Joywave, Penguin Prison, Latroit, and more. Take a listen below!

“Molecules”has now become a Top 10 hit at Alternative radio. The single is taken from the Australian band’s recently released Inanimate Objects, the follow-up to their breakthrough debut When It Was Now. Entertainment Weekly hailed Inanimate Objects as one of the best new albums and noted “it’s a huge leap forward for the band – the hooks are bigger, the production deeper and more angular, and the grooves tighter. Jittery shout-along single ‘Molecules’ is the centerpiece, and it’s an undeniable gem.”