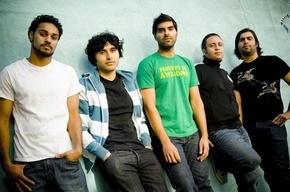 The boys of Bamboo Shoots are a Cinderella story come true. The New Jersey born four piece had their futures all planned when MTVu threw them a curveball and announced them the winners of their Best Music on Campus contest.

The boys have since signed with Epic Records, appeared on Late Night with Conan O’Brien, and created the fresh and danceable album. Armour, produced by Jerry Harrison of Talking Heads, featuring the mixing talents of Mark “Spike” Stent.