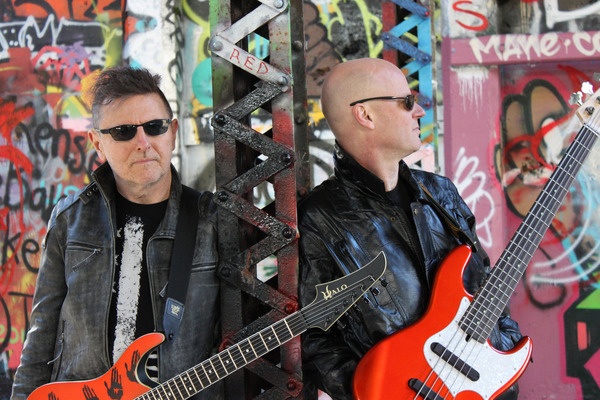 The Refusers know that punk rock is the true way to be a skeptic: not by participating in civil discourse or getting in line to vote, but by pounding out the realities of the human condition with toe curling riffs and punchy choruses. Nowadays, the 60’s mantra made famous by Timothy Leary and seen on millions of bumper stickers, “Question Authority”, has become a sentiment that will no doubt get you censored, or potentially, incarcerated. Behind fearless leader Michael Belkin (songs, guitar, vocals), Grammy-award winner Brendan Hill (drums), Eric Robert (Nord Keyboards), Joe Doria (Hammond Organ) and Steve Newton (bass and background vocals), The Refusers band together to give a voice to the voiceless. Through the megaphone of a whopping 111,000 Facebook followers, The Refusers erupt with passion and perspective, whether they’re opening for The Black Keys, or playing a local show in their hometown of Seattle. Showtime is always the right time for a rebellion.

Their most recent album Freedom Fighters received outstandingly positive critical acclaim—to which The Refusers flipped a big ol’ bird. It’s not about that for this crew, as they continue to roll out singles that tear into establishment views, call out the globalists…. and melt faces along the way.

The most recent of these in-your-face anthems, “Eat the Bugs”, is earning international attention—not only for its doomsday soundscape, but also for its critical message. All you have to do is google “Nicole Kidman/Bugs” to know that this glimpse into the future is already here. The truth has a certain ring to it and The Refusers refuse to shy away from alerting us to what’s to come. Loaded up on distorted power chords and Bonham-esque drums, Belkin is our demonic salesman, pitching on behalf of the World Economic Forum chair Klaus Schwab’s “modest proposal” to use bugs as a source of green protein. Whatever side of the aisle you stand on, “Eat the Bugs” allows listeners to appreciate the jarring, if not prescient, idea in its most grandiose form—with a scream-along chorus that gets stuck in your head like a solid three beer buzz.

To further embrace the stomach churning world of “Eat the Bugs”, look no further than its music video. The clip adopts Belkin’s dystopian vision with simple visuals to imagine the tyrannical, not-too-distant future when the entire human family eats literal, crawling bugs. With the sense of humor necessary to approach such topics as eating bugs, the video utilizes lyrical overlays and gritty, hardscrabble effects that would merit a trigger warning for the squeamish—if The Refusers actually gave a damn about your sensitivity, that is.