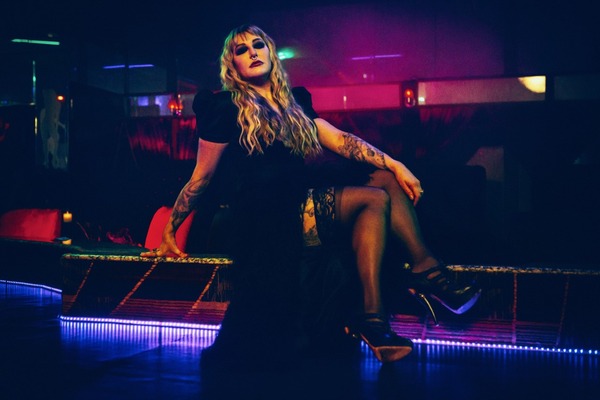 The music video for Iva Toric’s “Trust Fall” begins with models walking a fashion show runway. While this is going on, Toric sings about someone who is over controlling. Whether this is actually about being a repressed model, or just using that lifestyle as a metaphor, it’s effective either way.

The lyric begins: “He wants to change the way I walk/He wants to change the way I talk.” Isn’t that the model’s life? It’s as though women and men are forced into becoming human advertising robots. There’s nothing wrong with beautiful people displaying beautiful clothes, but when a person is stripped of his/her humanity, that crosses an ethical boundary. Then again, this could just be a visualization of what it feels like to be overpowered and controlled by another human being.

Instrumentally, “Trust Fall” begins with an ominous electric guitar part, with Troic singing hurtfully over a relatively simple minor key guitar part. Although the first verse begins with the indictment of a male, the second verse finds Toric speaking to “her.” About midway through the track, an orchestrated part sets in, nearly replacing the guitars. It finds Toric asking, “Can you hear me?” It’s as though she’s not sure if her oppressors even hear what she’s telling them. There is some relief in at least being able to express one’s pain. However, when such expressions fall on deaf ears, this can serve to heighten the pain. Then again, she does also sing, “Hear my call.” Could this be her cry for help? Might someone outside her bad situation not notice her distress?

Toric sings this song with a plain sincerity. She doesn’t scream any of it, although screaming may well be warranted – considering the circumstances. She also doesn’t try and finesse her vocal, either. She never turns her singing into any sort of vocal showcase. She clearly wants to be taken seriously with these words and doesn’t want any musical frivolity to distract the listener from receiving her message.

She ends by singing about holding on and trusting the fall. This suggests it’s going to hurt her once this bad situation (or situations) end. She’s bracing for the conclusion, one surmises. While she speaks like a fighter, she’s also a realist. This is not a battle she can win. It’s only one she can survive we’re led to believe. There’s something to be said for realists. Yes, we always like it when our hero saves the day. Nevertheless, real life is not usually so B-movie like. No, real life also includes losers in losing situations. We as humans sometimes must learn to lose gracefully. Such seems to be the case for Toric.

Toric has said, “My latest single “Trust Fall” is about finding the courage to leave a toxic or abusive relationship of situation and the fear and exhilaration that can come from such a decision.” She has hit the mark of that goal, for certain! One quickly picks up on Toric’s “fear and exhilaration” expressed through her words and singing. This is not easy listening, not by any stretch of the imagination, but it is both impactful and necessary.