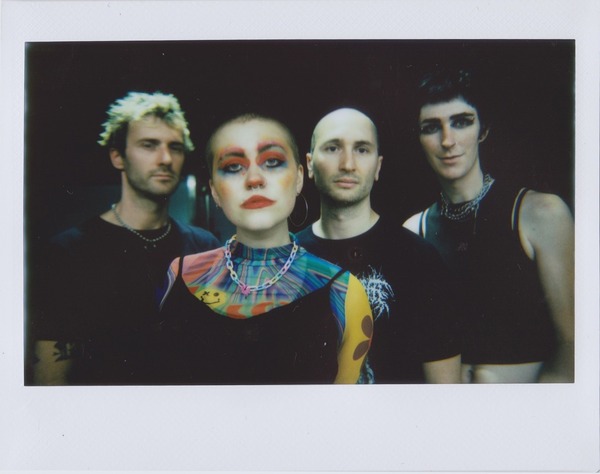 Heavy metal powerhouse DEAD BY WEDNESDAY, from New England, continues to pummel people’s eyes and ears with the release of a new intense lyric video for their song “Invincible.” The single is taken from their brand new album Capital Conspiracy, that released June 24th, 2022 on Mindsnap Music / Salt of the Earth Records. This crushing new opus from DBW is a total lesson in authentic musical aggression and was produced by Nicky Bellmore (drummer & producer of Dee Snider, Corpse Grinder, & Jasta). DBW’s album is available in stores as well as anywhere music is streamed or downloaded. Capital Conspiracy also hit # 1 on the nationally renown NACC Top 30 Loud – Hard Rock Radio Charts!

“‘Rebel’ is a journey through the gut bustin’ rollercoaster ride of emotions when a relationship ends. The mourning of once was, while battling the bitterness of being left. Rebel is a mix of beauty immeshed in chilling melodies & lyrics. Highlighting the duality struggle of wanting to be alone, and not wanting to be alone,” says the band.

Today, GRAMMY-nominated and critically-acclaimed songwriter COURTNEY MARIE ANDREWS returns with “These Are The Good Old Days”; a new single from her forthcoming album ‘Loose Future’, which arrives on 7th October via Fat Possum.

With Seeing the Elephant, THE OFFERING have woven together a record as rich, adventurous and heartfelt as anything you’re bound to hear anytime soon. Conceived during the chaos of the 2020 protests and the ensuing warzone of cultural upheaval, Seeing the Elephant is a challenging (and ultimately rewarding) record for extreme times.

Regarding the forthcoming LP, lead vocalist and guitarist Johnny Stevens a.k.a. “Terrible Johnny” shared, “Life comes at you fast. We are constantly reminded of this, and perhaps no greater occurrence will spark the imagination more than the death of a loved one. In my experience, it’s during these moments of processing great loss that the mind is completely focused on ‘what if’s’ as we try and escape what is. The Midnight Demon Club is about becoming the best version of yourself after tragedy, so it’s a second chance on life with a happier mindset. The Midnight Demon Club is all about having fun and keeping it moving. Because as we all know, this life is way too short.”

WELCOME BACK MY FRIENDS: THE RETURN OF EMERSON LAKE & PALMER

Sole surviving member Carl Palmer, in association with the Estates of his bandmates Keith Emerson & Greg Lake, has announced the much-anticipated WELCOME BACK MY FRIENDS- THE RETURN OF EMERSON LAKE & PALMER Tour. Launching on Friday, November 18th., 2022 at the 2300 ARENA in Philadelphia, PA, the tour will actually reunite ELP LIVE ON STAGE through modern technology.

A track created for festival mainstages, ‘Knuckles’ is a pop driven indie banger, packed to the brim with hooks. “We wanted to create something feel good and carefree. A song close to our hearts, but wide open for interpretation, it’s a new age indie tune designed for letting loose,” lead singer Jack Cochrane said of ‘Knuckles’. “Lyrically the track is inspired by the notion of the strong female spirit I’ve been lucky enough to be surrounded by throughout life. It’s about resilience and strength.”

Today, The WAEVE, composed of Graham Coxon and Rose Elinor Dougall announces the release of their eponymous debut album, out February 3, 2023 on Transgressive Records.

“The song is self-produced and recorded in my own home,” Ajay says, adding that it “was written about my angst towards the music industry and the superficiality of the industry’s gate-keepers and even sometimes the artists.”

It’s Labor Day Weekend, and it’s time to turn up with the dynamic duo, DJ Drama & Jeezy, to get your weekend poppin’! The GRAMMY Award-winning DJ Drama released his hot new single “I Ain’t Gon Hold Ya,” featuring Jeezy, today via MNRK Urban. Produced by Helluva, the single samples have the two showing why they are still one of the best ever to do this. The accompanying video was directed by JonnyRaw and was shot outside the ATL legendary strip club Magic City, which is the hub for many of DJ Drama & Jeezy’s hits.

His new song, “Crushed,” combines this sweet thing of having a crush on someone, with this violent imagery. The song encapsulates this combination of sweet and sour, with its poppy melody and bright production juxtaposed against a whiny and abrasive vocal tone, and very distorted electric guitars.

The band comments, “The song is our interpretation of the Dyatlov Pass incident of Feb. 1-2, 1959.Take a listen!”

While alluding to similar themes on their masterful, year-end-list topping 2019 debut Dark Synthetics, lead singer Lena Machina bravely opens up about her experiences managing mental health on Autonomy in a way that she never has before, creating a riveting narrative throughout — the lyrics of “Luxury Bitch” directly confront personal experiences of insecurity and lack of self worth, before acceding to the fact that she is worthy of love.

ANTIGAMA's "Disasters" Is An Angular, Stuttering Destroyer Of A Song

TM88 DID! —PRODUCED TRACKS OFF NUMBER 1 ALBUMS FOR DJ KHALED AND FUTURE

TM88 is a GRAMMY/NAACP Award nominated producer and Taylor Gang affiliate. He’s a staple in the Atlanta trap scene and hip-hop. As an artist he holds over 6 billion streams as a producer and as an artist has collaborated with Lil Uzi Vert, Young Thug, Future, Juicy J, Gunna, Moneybagg Yo, Wiz Khalifa, Project Pat, Lil Yachty, Valee and more.