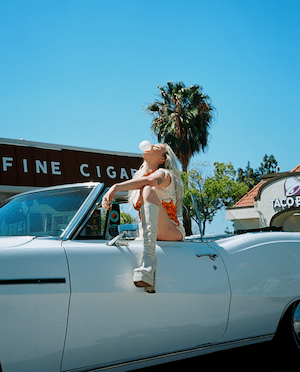 Post-BROCKHAMPTON, MERLYN WOOD Discusses His Struggles with Addiction and Identity

The Struts release pop-flavoured video for ‘Fallin’ With Me’

To celebrate, he shares his folky introspective new single, “Learning How To Die.” Portair explains the origin of the track, “this song was inspired when a book I was reading quoted the Philosopher Montaigne ‘All good philosophers are learning how to die’. I thought this was a really provoking thought. We’re all dying from the second we’re born, so how do I best live my life and in turn ‘learn how to die’.”

The track fuses glimmering production with breezy acoustic guitar parts and a dynamic beat. Over the undeniable backdrop, Hastings carries an instantly irresistible chorus, “It’s killing me, how much it’s not killing you”.

Boston’s Muck and the Mires, have been described as a blend of the HAMBURG-era BEATLES and the CBGBs-era RAMONES. They have built a worldwide following through relentless touring, radio and satellite airplay, and a string of recordings (considered by many to be cult classics) produced by Kim Fowley and Jim Diamond. The band gained worldwide recognition when they were featured on MTV as the winners of Little Steven Van Zandt’s (E-Street Band/Underground Garage) national battle of the garage bands contest.

On Friday, Living Hour’s new album, Someday Is Today, will be available in the US courtesy of Kanine Records. Today, the Winnipeg band is sharing one last peek at the album with the new video for album cut, “Middle Name”, a track about “getting stuck with yourself, forever, like an assigned middle name, or DNA,” says singer Sam Sarty. “Some of it’s already built in, but mostly you’ll be walking around as you, doing dishes, meeting people, untangling what it means, being busy being busy.”

Los Angeles singer-songwriter Hunter Daily is making her official debut with a brand new single entitled “Die In LA,” the first in a series of singles that will arrive in the next few months via Flush Records. Alongside Executive Producer Jenna Andrews (the hitmaker behind BTS’ “Butter” and “Dynamite,” in addition to Benee’s “Supalonley”), Daily spearheads music that encompasses the romance, heartbreak, and complexity of her hometown.

“Like A Boy” serves as her third single of the year and follows a string of singles that include her 2021 breakout viral hits “Fever Dream” (23M+ streams) and “Give Me a Reason” (17M+). Each has amassed over 100K pre-saves and led to Rossi being the first independent artist to do so consecutively. Rossi’s powerhouse vocals and talent for penning relatable lyrics have resulted in a devout and organic following of millions. Listen to the heartfelt track below, watch the creative visualizer, and follow the fast-rising artist as she prepares to release her forthcoming EP.

Is Joyce Santana’s “Besties” (Remix) a Catalyst for Change and Inclusivity in Reggaeton?

Trentemøller’s Crystalline “Into The Silence”

The new track is a dreamy, guitar and synth driven outing that fits alongside the music throughout Memoria from earlier this year that earned praise from Stereogum, American Songwriter, BrooklynVegan, KEXP, and many more.

Cruel infuses nine fun-loving songs about amour and heartbreak in a mixture of both English and French, serving as an authentic representation of the languages they speak at home. The title track is about that combination of pleasure and pain—desiring someone that’s cruel to you and the consequential heartache. Sexy and dancy with somber undertones, “Cruel” has a funky disco vibe.

Afta Hill and ASADI are Persian diaspora artists from Los Angeles and Toronto respectively, coming fresh off a live performance at The Ford in LA. Their new collaboration, “Citrus Dream,” is a smooth, nostalgic R&B pop track infused with traditional Persian instrumentation and inflections.

To close out the summer, Grammy-nominated rapper, mogul, and philanthropist Lil Baby has unleashed a new track “Detox”. The Atlanta native has launched himself into superstardom since his inception in 2017, and “Detox” is the latest in a long line of hard-hitting tracks that showcase the rapper at the top of his game. The new single is an indication that Baby has no intentions of slowing his grind and continues to fortify himself as the reigning champ of his era. To accompany the release, Lil Baby shared a new video for the track.

The track features groove-infused dance pop landscapes under captivating melodies. The accompanying lofi vintage visuals combine nostalgic influences from the 70s and 90s, and follow Skofee as she indulges in a wild desert escape – and a road trip gone wrong. Skofee has received acclaim from the likes of Ones to Watch, LADYGUNN, LA Weekly and KCRW as well as Sirius XM.

Award-winning Italian producer, multi-instrumentalist, arranger, and re-mixer, NeroArgento will be releasing his sixth studio album “Land of Silence” via Rockshots Records on October 7th, 2022. To date, in a preview of the record’s release, he has unveiled two songs “Daybreak” and “The Way I Am” and today, he shares its third single and album title track that features special guest Vicio (Subsonica, Infernalizer).

Today, JAXXON drops poignantly twisted new music video for “In Vain” from his impending album Numbskull, which is set for release September 16 via Cleopatra Records. The video features a caged Silva as a puppet, being manipulated by a dark figure, fighting his way to escape.

FNTM released their new single “IM NØT OKAY” feat.Telle Smith (THE WORD ALIVE) along with the official music video to all major platforms! The single was produced, mixed and mastered by Jeff Dunne (Ice Nine Kills/Wage War/Motionless In White).