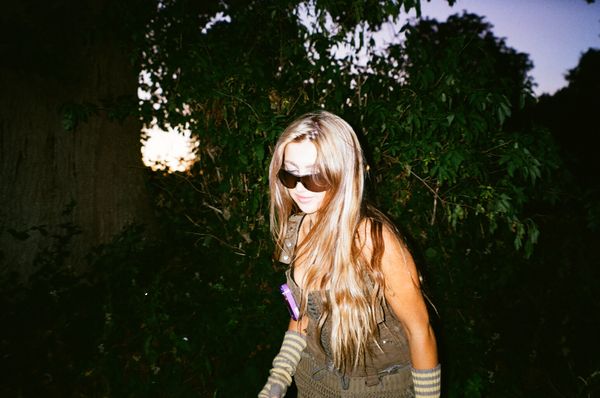 “I chose to do ‘Everything Dies’ by Type O Negative because it’s my best friend and bassist Cam Dewald’s favorite band and it his most favorite song and he told me why, when he was down and out and thinking life couldn’t get any worse, he listened to that song constantly and it got him through the day. So I told am we’re doing it. He is so happy! Also who doesn’t like Type O Negative!” – Matthew A Lidwin

One of Norway’s best-kept secrets could well be Mia Berg who today uploads her best single yet titled “Meadow.” Although the song’s lyric tackles a tougher subject, the track itself feels like a freezeframe moment of those nostalgic times you’ve had, like a later summer afternoon you never wanted to end. Today’s song announcement also comes with the news of a debut album coming on October 21st, 2022 titled “Sleepwalkers At Noon” via GEMS records.

The Homies Do It All on ‘It’s A Lot Going On’ Album, Share “Out Here” Video

Awake And Talking, the nine track LP out now, puts Haddard’s self-examination on full display as she navigates the nuances of love and her relationship to art, and wrestles with existential questions through various lenses. While producing the album, some of the great songwriters of the late 90’s and early aughts–everyone from Stereolab and Oasis, to Björk and the Cocteau Twins–were in Haddard’s heavy rotation as their conceptual songwriting and harmonic approaches provided plenty of inspiration. With writing partner and multi-instrumentalist Charley Ruddell and drummer Josh Strmic, the trio came together in places of comfort like their weekly rehearsal space, Haddard’s childhood home upstate, and their home studio to create this collection of songs throughout the year before tracking them over the course a week in the summer of 2021. Now with a more mature, renewed perspective, Haddard’s intimate yet audacious sound is both self-assured and delicately fearless.

Matthew Squires & The Learning Disorders is a band centered around the songs of singer- songwriter Matthew Squires. They are based in Austin, Texas, and will be releasing a new EP entitled The Electric River on October 21st, after a three year hiatus. Since 2012, the ever-evolving band has released eight critically-acclaimed albums which have received praise from Stereogum, TheNeedleDrop, Brooklyn Vegan, and many others.

Today, Bluphoria share their major label debut single “Set Me Up” – a high-energy alternative rock song with blues and psych-rock influences that satisfyingly takes the listener on a journey from anger into a cathartic dance party.

Toronto-based folk duo, Basset, are full of timeless heart. Acoustic songwriters Sam Clark and Yasmine Shelton will take you from a beekeeper’s fields to the haunted basement of a second-hand store, in a style that is all their own.

Basic Vocab is a Hip Hop group hailing from the sunshine state of Florida. Consisting of MC’s Mental Growth and JL Sorell, with production from Square4, their style has been described as a mix of old and new school Hip Hop, with undertones from the golden era of the 1990s.

Get acquainted with multi-hyphen genre artist Charlotte Plank (UK/AUS) whose debut single “Hate Me” offers a glimpse into her incredibly unique brand of hard-hitting jungle beats, soft R&B vocals & indie alternative lyrics. The newcomer already counts on Piri and Venbee as supporters within the scene, where music is made for those warm, long summer nights to unleash any emotions, whether that be someone who gets under your skin, the lost boys that still haunt you, or the chemical exhilaration and comedown of a new crush. You can stream the song immediately on all streaming platforms via Black Butter Records (J HUS, BAKAR, Zara Larsson.)

A highly rated American football prospect before turning to a music career, Kevin George has quickly built an audience on the back of his genre defying cuts, picking up support from The Fader, Complex, 2Dopeboyz, Pigeons & Planes and more, as well seeing his music playlisted in such Spotify staples as POLLEN and Alt-R&B. Keep a close eye on Kevin George this year.

After the release of their debut album Dead Reckoning in 2021 via Noble Demon, followed by several single releases, Oceanhoarse like to stay busy and are perhaps one of the most notable and hardworking newcomers out there right now. This is also proven by the latest single of the quartet from Helsinki, which already gives a remarkable first glimpse into a new album the band is currently working on! “Nails” is not only a powerful and melodic heavy metal banger, as we are used to from Oceanhoarse, but also features Martin Lopez from Swedish progressive metal masters SOEN on percussion!

On the rise country music singer/songwriter, Allie Colleen, has announced the release of her new thought-provoking and emotional single, “Feels Like.” Penned by Allie Colleen and Kimberly Atwood, the uplifting new love song is bursting with relatable descriptions expressing how it feels being with that special someone. The new music has been well received by fans at live performances who have connected with the lyrics as it has proven to touch listeners’ hearts and bring back special moments in their own lives and creating a bond between Allie and her ever-growing fan base.

Written by Doleac along with Zach Abend and Derrick Southerland, the song is known by his fans as the “watered down vodka soda song,” from the hooky line “Everybody and your momma told ya / He’s a watered-down vodka soda.”

Italian experimental outfit OvO show no signs of slowing down heading toward the release of their upcoming album, Ignoto. Today they release their third single from the album “La Morte Muore, Pt. 3.” Dissonant, haunting and dark, the track is a microcosm of the album itself.

Earlier this week Panic! At The Disco released “Don’t Let The Light Go Out” which follows the release of songs “Local God”, “Middle of a Breakup”, and “Viva Las Vengeance”. “Viva Las Vengeance” scored the band their third #1 song on the Billboard Alternative Airplay Charts, the fastest song to climb to #1 in over a year!

The Happy Fits share thrilling, pineapple cartel fan-chosen video for “Around And Around” ahead of third LP out Aug 26

Written, performed and produced entirely by Maggie herself, ‘Paralyzed’ is an all-encompassing sonic experience of this budding new artist and an authentic reflection of her widespread, innate musical ability. Opening on a cathartic bed of strings, the track quickly builds into a cavernous space to home the undeniably unique vocals of Maggie, set to soundtrack the emerging world of alternative pop this 2022.

Known for their sunny, melodic surf rock and buoyant, rhythmic jams, it follows their previous, breezy single “Topo Rides the Wave,” proving that the band will always be there to provide the perfect summer soundtrack.