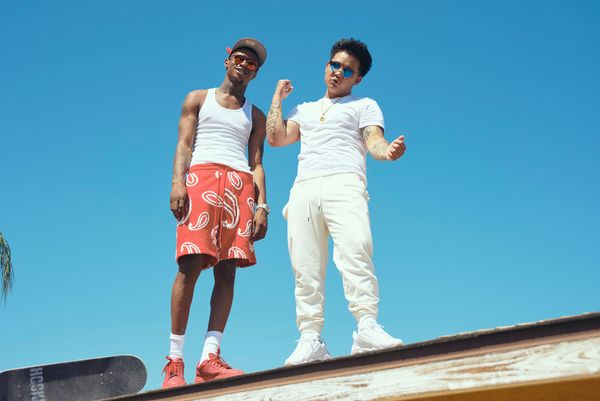 Most Star2 fans are now aware of his inspiring story: born in a Thai refugee camp, abandoned by his mother and father as a baby, moving to San Diego with his grandmother to a rough neighborhood in San Diego at a very young age. They know Star2 turned to music in his toughest moments, in a life filled with strife in forms many will never face or understand — early on and throughout his young life. He’s a transcendent lyrical storyteller who is a phenomenal role model for groups underrepresented in music and entertainment. His experiences, detailed time and time again, have made him stronger and have shaped him into the soaring Asian-American singer, songwriter, and rapper he is today. Since releasing his 2020 debut single, “Hollup Gurl,” which has almost 300,000 streams on Spotify, he has shown indisputable personal and professional progress. This growth along with Star2’s remarkable talent and his hunger for greatness are showcased in his new single, “GO!” featuring fellow rap artist Hoodtrophy Bino.

In “GO!” Hoodtrophy Bino raps, “fell asleep, had a dream that me and Star was famous,” and their collaboration on this hot and simmering summer hit conveys their respective rises to fame (and is a prediction of what is yet to come). As soon as the song begins, the backing track hits hard with the trap drum beats and electronic instrumental accents. Every round of the chorus has the duo inviting listeners to keep watching them GO!- their verses are powerful and straightforward, delivering details about grinding to the top. Their message, their theme of being your best to achieve optimal success will resonate with all members of their now blended audience base. The magnitude of Star2 and Hoodtrophy Bino’s musical intensity in “GO!” matches the electric video. These two are meant to be seen and meant to get the party started!

From extreme skateboarding to off-the-chain hip-hop dancing, it is impossible not to feel excited by the momentum from these youth warriors in action. The two artists themselves give a compelling performance in the middle of everyone’s fun, in the skate park bowl with skaters literally whizzing in between and around them, also cruising around Venice Beach hanging outside of a low-rider car, past palm trees, and really embodying the West Coast Hip Hop vibe made famous years back but still alive and well. Star2 and Bino live it up, while listening to their song detailing their innate (and necessary) drive to chase opportunities (GO!), to do what they do (GO!), and have a raging time (GO!). Star2 and Bino manifest this lifestyle: their talent in the arts, in hip-hop music, does not come without passion, perseverance and the ability to go for it. No dreams or goals can happen without all three. “GO!” is for those who need the visual reminder and the hypnotic beat to manifest it for themselves too.