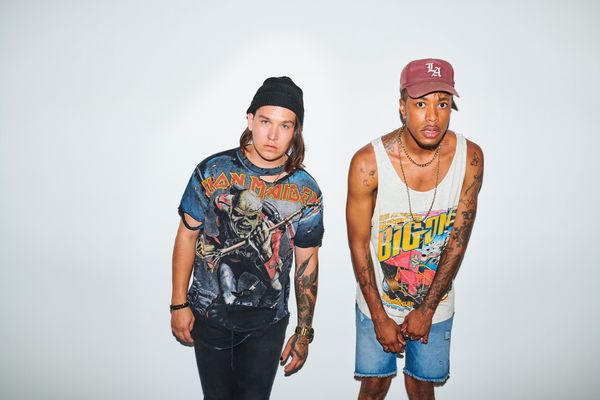 Some songs are so propulsive that they could make even the most passive listener move. Some experiences are so uplifting that they could get anybody up on their feet and cheering. Sometimes love is so powerful that it feels like it could pick you up and carry you down the street. So if you see somebody dancing, that’s not always a voluntary act — not exactly. It can be a joyous compulsion and a spontaneous act of celebration and release. That’s the sort of phenomenon that Frank Kadillac is singing about in “ITS ALL GOOD,” the latest single from Neon Dreams. “I don’t wanna dance, but you’re making me dance,” he confesses. He could be talking to the woman of his dreams, the spirit of the night, or his musical partner Adrian Morris, who has once again created a track designed to light the spark that starts the party.

Positivity, happiness, playful hedonism, friendship, and attraction: they’re all audible in every track Neon Dreams has ever put out. But none of their prior songs have made the good vibes quite as palpable — and pleasantly inescapable — as this one does. From the first drumbeat to the last synthesizer chord, “ITS ALL GOOD” is a tribute to the thrills of getting swept away. It’s the latest success from the Halifax, NS duo and a demonstration of all the qualities that prompted JUNO Award voters to name Neon Dreams their “Breakthrough Group of the Year” in 2020. They’ve also won the Nova Scotia Music Award for “Electronic Artist of the Year” and the Canadian Radio Music Award for “Best New Group” for their ecstatic single “Marching Bands.”

And while they call the Canadian Maritimes home, they’ve got a profound connection with another part of the globe: South Africa. Their 2019 single “Life Without Fantasies” became a platinum-selling hit there and prompted a 2021 tour and a collaboration with Ubuntu superstar Mthandazo Gatya. For the “ITS ALL GOOD” clip, the duo is back in South Africa, hard at play in Cape Town on a glorious day. The camera finds them outside a drive-in burger joint (with plenty of local treats on the menu), inside a spacious bar, and on the walkways near South Africa’s famous beaches. Wherever they go, a dance party breaks out — and if you were lucky enough to be there, we bet you’d be moving, too.