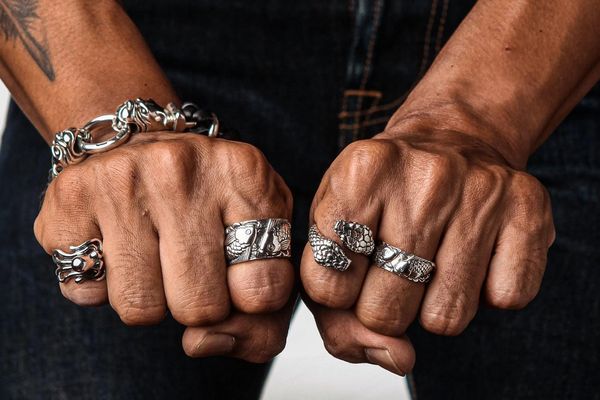 Bikers are a subculture and biker jewelry is an integral part of this subculture. Pieces of jewelry worn by a motorcyclist can say a lot about his/her beliefs and personality. Each item is filled with a deep meaning and each symbol carries information that every member of the biker pack can relate to. Being a biker means riding a motorcycle, and it is not just a hobby, it is a lifestyle, and this lifestyle cannot exist without jewelry.

If you are looking for biker jewelry you need to check out https://gthic.com/collections/biker-rings

History of Bikers and Their Jewelry

People started riding motorcycles long before the rise of the biker subculture. The first models of two-wheeled vehicles equipped with a motor were invented in 1884-1885 and quickly gained popularity. The first motorcycle clubs appeared around the same time and consisted of predominantly blue color workers.

The biker subculture emerged in the second half of the 1940s. The very first biker club was founded by US Air Force pilots who returned home after the war and felt out of place in civilian life. Just a few years in existence, and the reputation of the biker movement was severely damaged. In July 1947, Hollister hosted a motorcycle rally, which brought together several thousand people. For some reason, the rally turned into riots that swept the entire town.

The American Motorcyclist Association (AMA) condemned such behavior saying that only 1% of all motorcyclists have trouble with the law, and the rest 99% of the community are decent people. Those who fall into this “one percent” category actually liked the idea of separating themselves from the righteous members of the AMA. The symbol of 1% started appearing on biker jackets, motorcycle decals, tattoos, and eventually jewelry.

Despite the less-than-positive reputation, the biker movement was not banned. By the 1960s which signified the heyday of the hippies, more and more people started riding motorcycles. The biker lifestyle is associated with freedom, and this is one of the most cherished concepts for hippies. Hence, biker clubs started being bigger, and the movement itself spread like a wildfire.

Although the biker subculture emerged in the USA, its jewelry has a Mexican origin. The first half of the 20th century was a nightmare for the Mexican economy. Severe inflation swept the country and its currency, the peso, reached an all-time low. Coins became literally worthless. At the same time, resourceful artisans saw the potential to use the coins for crafting jewelry and souvenirs. Soon, handcrafted trinkets flooded small towns near the US border. They cost next to nothing and their original look appealed first to local, and then American motorcyclists. Since then, jewelry resembling good old Mexican rings, such as jewelry that can be found at Bikerringshop, became the staple of the biker subculture.

The Philosophy of the Biker Subculture

Freedom. Bikers can do whatever they please. They are not tied to a specific place by property. Every biker is his own master; Honour. A biker must abide by the rules. He cannot offend newcomers or other members of his club. He must always help those who are in trouble.

Loyalty. A biker must respect the traditions of the movement and be accountable for his actions.

Individuality. A biker is free to express his individuality through jewelry and other means. Customization and embellishment of motorcycles are highly encouraged.

Materials and Colors of Biker Jewelry

Biker jewelry relies on inexpensive yet durable materials such as steel, titanium, and brass. The most common, however, is sterling silver, which is affordable and precious simultaneously. The cold sheen of the metal matches the shiny chrome-plated parts of a motorcycle. In addition, silver accessories go well with dark-colored clothes. Gold is used rarely, not only because of its cost, but also due to its softness.

How to Wear Biker Jewelry

To become a biker, it is not enough to put on a leather jacket and choose appropriate accessories. Only because you wear biker rings you don’t become a biker. That being said, motorcyclists, although they don’t appreciate ‘sub-cultural appropriation’, don’t explicitly forbid wearing jewelry featuring the designs and symbols common to their movement. The only taboo is wearing jewelry and accessories showcasing the emblem of specific biker clubs if you are not a member. The only exception to this rule is if a piece of jewelry was given to you as a gift or keepsake from someone who belongs to the biker community.

Because of the spectacular design and larger-than-life dimensions, it can be difficult to combine biker jewelry with other trinkets. Simply because it is so dominating, other pieces pale in comparison. If you are not sure how to combine a biker ring with regular rings, here is a suggestion: add it last, just like an artist adds the finishing touch to their painting. It will either crown your style or make you rethink your choices

Each piece of biker jewelry comes with its own history and has a special meaning. If someone lays eyes on your jewelry, you will always have something to talk about.