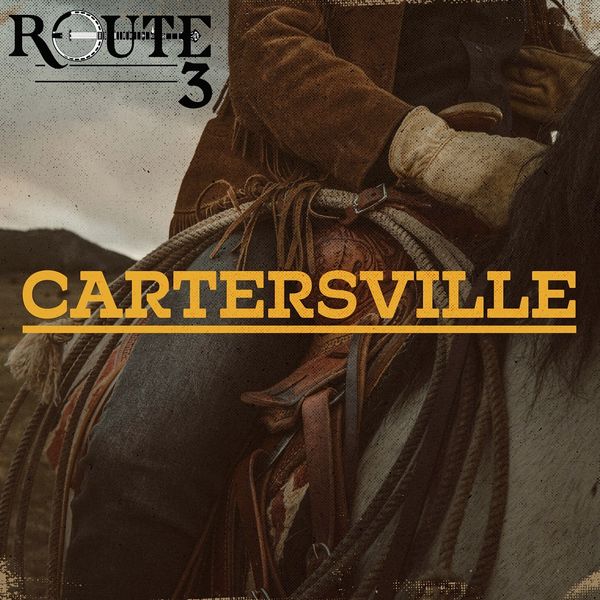 The bluegrass four-piece Route 3 is essentially an all-star band for the genre. The stylistic pedigree each of the four musicians brings to the table isn’t merely gloss on an otherwise unsatisfying musical adventure. Their knowledge and experience inform the songwriting and playing every step of the way. Gaylon Harper, Roy Bond, Jason Jordan, and Doug Clifton are more than casual fans of bluegrass and seek more than just paying tribute to the past. Instead, Route 3’s new single “Cartersville” invokes the past while delivering bluegrass devotees a personal touch elevating it far above the mundane.

It has an up-tempo clip without ever feeling rushed. Gaylon Harper’s banjo leads the way, at least initially, but there’s a well-balanced musical attack soon emerging from the mix. The band’s religious beliefs are a great source of inspiration for them but please don’t be alarmed that Route 3 is trying to save souls. They are working in storytelling mode here with a steadily evolving narrative that pulls from the genre’s songwriting tradition while boasting its own strong identity.

There’s a definite message in the words, but Route 3 allows listeners the latitude of interpreting it as they wish. A polished yet authentic spirit burns from each second of this track without ever feeling like it is attempting to impose itself on the listener; even the song length demonstrates a clear appreciation for the audience’s patience and good faith. The sound is warm and robust, practically bursting from the speakers at some points, but it is also painstakingly crafted.

It doesn’t lean too far in any one direction. Route 3’s across-the-board attention to detail is another crucial difference between themselves and other modern bluegrass. They aren’t attempting to lay out some sort of typical twangy banjo-driven cut but, instead, layer it with brief and effective textural variations. Vocal harmonies are an important part of bluegrass that Route 3 embraces and it’s clear why. Such passages aren’t prevalent in the song so, when those moments come, they have added impact. Route 3 are serious musicians and committed to their craft.

Many of the best bluegrass performers feel a connection with the style that exists at a practically cellular level. It’s safe to say that Route 3 shares that same devotion to the style. They’ve been studying it since their youth, but there’s no sense of academic lifelessness weighing down the song. It’s alive, vibrantly so, and its immediacy renders any concerns about sounding “current” null and void. Even the fiddle, a stock part of virtually every bluegrass track, acts as an emphatic exclamation point on the single.

“Cartersville” will affirm Route 3’s talents for those already familiar with them. Newcomers will hear plenty of reasons to keep coming back for more and never hear the song as rehashing past bluegrass glories. It’s a chilling and engaging tale filled with flesh and blood creations rather than cardboard cutouts. Moreover, it demonstrates the band’s familiarity with the genre’s traditions and their imaginative spin on those tropes. Anyone who appreciates deeply felt songwriting will enjoy this album and keep coming back for more.