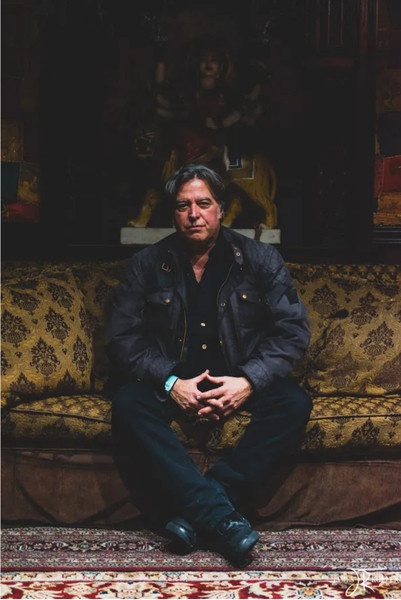 Dan Russell: the artist manager and advocate, concert promoter, producer, creative collaborator, video and film music supervisor; has helped launch a thousand ships (well, maybe just a few hundred!) throughout his lengthy resume. As the critical aide-de-camp to dozens of aspiring artists and proven superheroes, it seems he’s always been in demand through a voluminous 35-year professional career. Is it because he sensed the needs of his ‘client’ and ‘the project’ with such zeal and focus that his friendship and trust inevitably elevated what could have been a mere business liaison? Russell’s reputation in music circles is one of a man willing to stand unwavering in the gap.

However, in “those younger days,” he wasn’t a ‘business dude’ at all. After high school, as a singer and guitarist, Russell’s great pastime became songwriting. “It was just a cathartic exercise. I’d get together with friends, and we would share our songs. We had a desire to convey our thoughts to music and it was fun.” But over time, his solo voice submerged, supplanted by writing collaborations, productions, or projects that came his way. “I would befriend or get close to artists. They’d say something like, ‘Hey, I just recorded a record for a label; do you know how I can get a band?’ So, I’d push my stuff aside and work on their projects.”

But, the desire to return to that earlier role, writing and performing his own work, never abandoned Russell. The ‘echoes’ kept dragging him back until finally, Russell deemed one important collaboration or promised business commitment to be the last one. Then, with official duties forestalled, the guitars came out of their cases and studio time was booked to record a series of his personal songs, the cryings of his own heart.

Working with a small band including his son Jesse, producer and guitarist Michael J. Pritzl, plus Rachel Taylor and Ramona Silver on backing vocals; Russell approached the sessions for his first solo album, Feel the Echoes, as a rare gift of time given to himself.

“Life is a sacred adventure, a journey, and it was my time to do this.” — Dan Russell