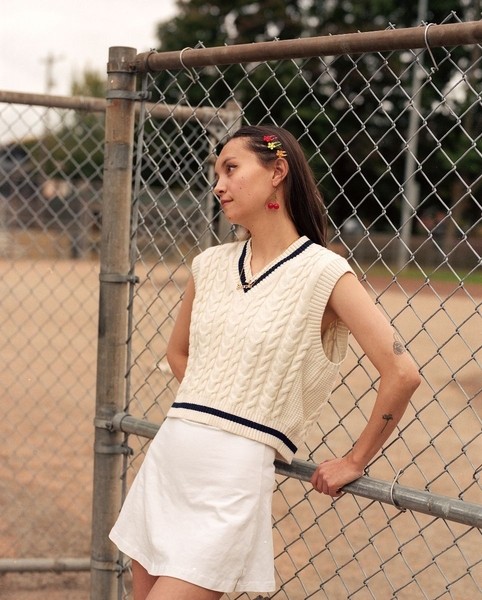 On the new moon of May 27th, dark cinematic project NEPTHISIS will return from the shadows to unleash their new single “Falling Ashes”. The single showcases the raw power of vocalist Sheila Eden.

Having released their darkness-fueled, chaos-driven album Spiral Hollow on January 21st 2022, NEPTHISIS is back and more sinister than ever with their new single, “Falling Ashes”. A rich soundscape of pounding guitars and haunting ambiance lay the foundations for Sheila Eden’s untamable vocal performance. From brooding contralto lows to operatic highs, and accented by blood-curdling extreme vocals, “Falling Ashes” is a mesmerising display of the full range of Eden’s voice. A marriage of horror film score and heavy metal, “Falling Ashes” is an exceptional and fresh take on the gothic rock genre.

Los Angeles riot grrrl-adjacent trio Lost Cat is back with the final single off their forthcoming debut EP, out May 27 via Lolipop Records. The single, “Loser’s Beware,” is yet another brazen and head-strong track establishing the group’s confidently spunky energy in the vein of girl groups of decades past.

“Let’s be blunt about it. This song is about our love of women and the joy of sex” says the band.

After years on the road crisscrossing the United States playing Honky Tonks, saloons, pool halls, and trailer parks alike, legendary country singer-songwriter Beau Nair recently released his debut single “I’m So Hard” off his upcoming debut album Truth Or Nair set for release later this year. Beau is kicked off the release of his debut album with the release of his debut single “I’m So Hard” following an exclusive premiere with VENTS Magazine.

As Spanish avant-garde doom metal trio ORTHODOX prepares to release their crushing Proceed LP through Alone Records in the weeks ahead, the band presents a psychedelic video for the new single, “Rabid God,” premiered exclusively through Decibel Magazine.

SNUPE BANDZ stands out in the Memphis scene with his tumbling flow, wry charisma, and endless appetite for flexing. Proudly displaying his Paper Route Empire loyalty in his latest video, SNUPE BANDZ proves that he’s much more than a sidekick in “Barnacle Boy.” Sinking his teeth into an ice cold instrumental from Sosa 808, SNUPE dexterously spins a tangled web of creative boasts, inspired by a deep cut character from Spongebob Squarepants and his aquatic nature: “Jumped in the ocean like we’re swimming with the sharks/I’m a big whale, n****, I’m a big shark/No flaws in my diamonds, I shine in the dark/Whole lotta ice on my neck like a water park.” In the video, SNUPE turns a routine trip to the grocery store into a block party, gathering his crew for an impromptu party in front of a Young Dolph mural in Memphis.

Seattle-based bedroom pop artist Sea Lemon (Natalie Lew) shares a new single “Turn Away,” an infectious track that channels anxieties into a piece of shimmering dream pop. Glittery and colorful, “Turn Away” is the third single from the artist, which FLOOD praised as “remarkably carefree.” Sea Lemon’s debut EP is due out this year via Spirit Goth Records.

Zachary Leo brings the grooves in ‘Can’t Get Enough’

Brittany Bliss and Reid Givens make up the twosome, and their journey is a touching story of reinvention, reclamation, and second chances on love. In addition to warming hearts, the couple are opening minds to female artists and helping shift the narrative of women in creative fields through support and exposure. Today, Brittany and the Blisstones announce their recording debut EP, La La Love.

Today, rising star Serayah releases her second single off her forthcoming album “Revenge.” The latest track follows Serayah’s return to the R&B scene with her first single of 2022, “P.O.V.” featuring Queen. “Revenge” takes you on the emotional rollercoaster of makeup and breakups in a relationship. Serayah passionately sings “slowly temporary, it’s not over, we ‘gon start it up”

Kansas City’s Dreams in Peril have a new single out just as they embark on a tour across the Midwest with Pig Weed. This tour will take them through seven states over nine days, and each one will be a display of passion, precision, and musicianship. The new single “Ascending” shows considerable growth since their debut album release in 2019 and it is a reminder to them and fans alike that despite the trials and tribulations one goes through in life, the mission is to ultimately overcome, or ascend. They provide their thoughts on the single: