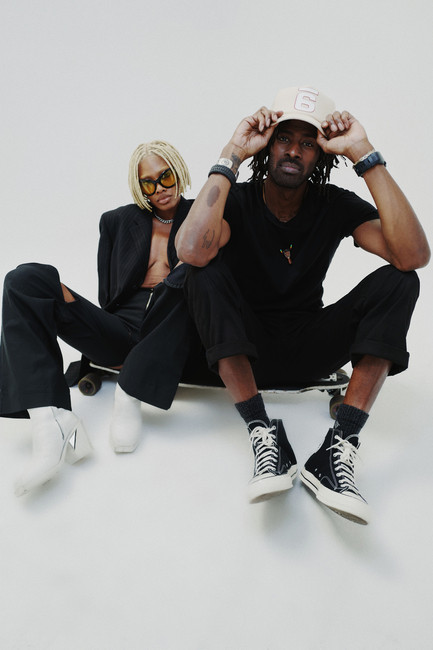 Synched together by undeniable talent and passion, Los Angeles-based duo RM47 – a collaboration between MAAD and Raleigh – have created a unique sound that appears to be transmitted from the distant future. Emitting hypnotic beats and lush harmonies, RM47 brings together each individual’s creative artistry to a new height in the alt/electro-R&B space. MAAD offers her magnetic vocals and drives the creative/visual side, while Raleigh’s expertise spans music and production; together, they write songs that create a fusion of sultry guitars, jersey club beats, and the body-moving rhythms of Afrobeat. Their creative chemistry led to the initial success of their track “Needed U,” garnering support from thousands worldwide. Now, RM47 is ready to debut “Strangers” to jet-set listeners into a new wave of music.

Some of the most intense connections can spark between strangers – and that’s precisely what RM47 explores in their track “Strangers.” Arriving as an unknown entity from outer space, MAAD is on the prowl for the right crowd of people to dance the night away with. She falls into the company of outsiders wearing colorful ski masks, where she is swept to a house party where Raleigh is performing. It is a haze of euphoria and recklessness, capturing the feeling of letting the music move your soul – as MAAD has pulled strangers into a trance-like state. The mesmerizing beats and electronic hums echo throughout the song as the story reaches an end. It is a refreshing track that pays homage to synth music with a modern twist. For a perfect introduction to the talents of RM47, check out “Strangers.”