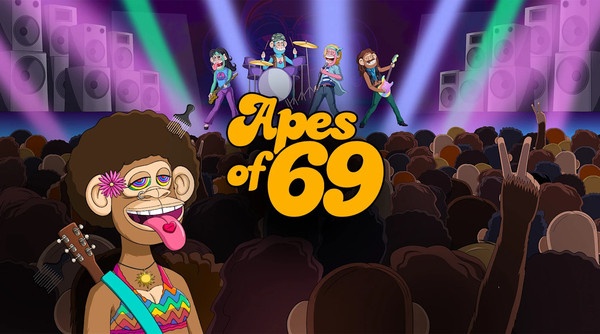 Apes of ‘69 (AO69) http://www.apesof69.com, an NFT project with a strong focus on music, community and creativity, just launched its platform. The AO69 platform celebrates music in all its glory by bringing together young musicians, music producers, record labels, and fans, in the new and exciting world of web3. The project will provide young artists valuable tools and a new platform to engage directly with their audiences.

AO69’s founder, On Goldshtein, says: “As we see it, Web3 is the biggest event in the music world since 1969. It will revolutionize the way the world will consume music. By building a supportive community led by individuals moved to express their talent and love for music, artists are granted more organic ways to spread their innovative work using blockchain technology and giving power back to the artists, through Web3 economy.”

AO69’s team is like no other that has yet to enter the web3 landscape. Each of its rockstars team members has vast experience in their respective industries, including marketing, advertising, music, art and blockchain, and have been involved in many successful web3 ventures, including leading NFT projects. With everyone seated at the table, the AO69 team brings together a host of successful startups, world-class brands, strategic contacts, and awardwinning marketing campaigns.

Taking a forward-thinking approach, the AO69 team realizes that the age of NFT collections that are no more than a piece of generative art has come to an end. With NFT 2.0 in mind, each AO69 NFT holders will have access to concerts, recording studios, burgeoning musicians, record labels, music producers and more – either in their capacity as musicians themselves, as music fans or as labels searching for new talent. Rather than waiting until after the project’s NFT mint, AO69 is taking a “merch-first” approach and as such, has already made available its online merch store, with exclusive, high-end merchandise.

Inspired by the late 60’s agenda, AO69 is deeply committed to a sustainable blockchain future and will be minting its initial NFT collection mid-June 2022. To learn more and to follow their journey, check out their website http://www.apesof69.com, and follow them on Twitter http://twitter.com/apesof69