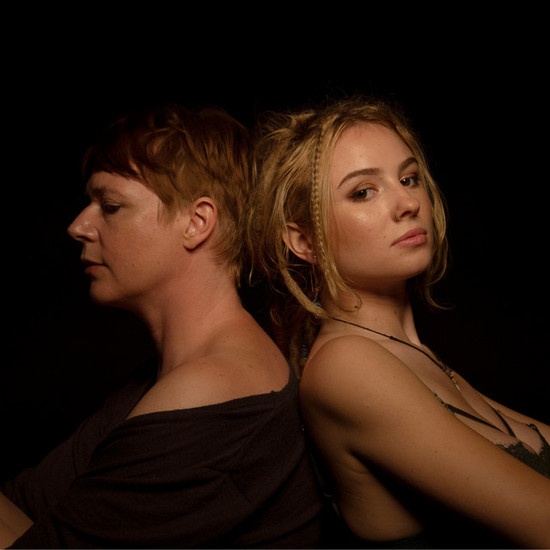 – “Of Blood and Star” is extremely diverse, with a good balance of melody and ambiance-driven soundscapes. What’s the key to balance the more cinematic component to the sound with the more traditional “song format” structures?

I think this is a product of two things. Firstly us both making music together. Lizzie’s delicate vocal and layered harmonising inspire a dreamier direction. Amy’s songwriting style is diverse in itself but always attempting to work with Lizzie’s very particular sweet and sultry tone. The other marriage made in heaven is the writing crossed with the dreamy guitarist, drummer, bassist and synth players who play on all the tracks. At the core of every song is a recording of the band playing the track together in the studio. If anyone alone deserves the soundscape credit though it would be drummer Evan Carson who pulled all manner of shaky things and high hat accessories out the bag to create, for example, the sonic landscape of Slip and strong groove of Pretty Lies.

– Your single “Invincible Heart” is very iconic and emotional. Can you tell us something about the background of the song, and what makes it stand out on the album?

Songwriting for a much younger lead vocalist provides quite a unique challenge. This song was an attempt to reach across the generational divide between the two of us. It is strongly from the heart lyrically. We owe so much to the people we love growing up. We can easily forget our young selves as the rigour and challenge of adult life wears us down. This song is also musically a special one for us because it marked a successful attempt (we hope!) on Amy’s part to sit back and do less. Do less twists and turns, leave out a middle eight and instead allow more space for other elements. It’s a peaceful song with a lot of repetition and gradual building of layers and ideas. It leaves space for Lizzies vocal and the haunting harmony textures. It’s definitely more the direction that newer material will go in.

– The album is incredibly diverse, as shown by songs such as “Where We DAre,” which has an amazing arrangement akin to 60s music, alt-folk, and more. What’s your approach when blending so many different styles and influences on an album?

I think the choice to have the same four session players bring the songs to life really helped to create more of a continuity in the sound, which allowed us to be freer to explore a range of genres. Obviously the vocals are also a unifying element. Several of the songs have string arrangements again pulling the sound towards something more cohesive we hope. All the string parts were arranged by Amy who has a 60s folk and classical music background through her upbringing, but had no experience writing for strings prior to this. As such the parts were painfully slow to create. Several days for a few bars in some cases. Some things are worth the work! And childhood musical influences are certainly strong in these elements of the tracks!

– What was the most challenging song to record and finalize for the album, and why?

In fact Invincible Heart had the most work post getting the players in the room. It’s got a hypnotic, repetitive groove and the producer added some little synthy motives that really softened and added to the mix.

– This record is a real rollercoaster, which will take the listener on a journey through so many vibes, styles, and moods. What are some of the artists who influenced your kaleidoscopic sound on this record?

– I know this new record is very fresh, but do you already have any plans to get back into recording or writing new materials?

We definitely do and we already are! We can’t not write, we would get sad! We are trying a slightly new direction. We are going a good dose darker and trying to combine some more dreamscape, primal and also Celtic influenced sounds within the framework of the robust ISYLA songwriting and contemporary, electro beats. So far we have both had quite separate roles as the songwriter and lead vocalist but as we work together we are expanding into both roles. It’s very exciting to make ourselves more vulnerable, put the trust in on another and step outside of the more natural and comfy roles we have explored so far in the two albums. Lizzie sometimes tells Amy, ‘Your songs are so wordy! Trust me to bring the words with my vocal alone’ There’s a new ISYLA incarnation in there and it is very exciting to start to hear it come into being. Lizzie dances, hoops and fire spins. We have recognised that we are missing a trick not to drive our future sound in a more hip wiggling direction that can include this art, as it is so visually arresting. Watch this space!

– Today, collaborations can be an incredible way for artists to spice things up. If you had the opportunity to collaborate with anyone, who Would you pick and why?

An artist we both absolutely adore is Aurora. She brings her magical energy into everything she does. Yes please if she is reading – we will do anything, tambourine, what ever!

– Do you have any plans to tour or perform live in support of the record?

Yes! We have gigs lined up in Cornwall for this Spring and Summer plus a gig at the magical Bedford in Balham on 24th of August!

– What’s the best way for fans to connect and keep up with what you’re doing?

Follow follow follow on all the socials. @isyla_official Our YouTube has all our videos, tons of fun behind the scenes and some gorgeous clips of Lizzie hooping and fire spinning too.. We all our social media ourselves so its fun of fun and character!