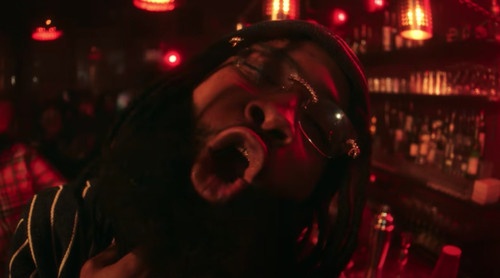 About a month ago, Sada Baby dropped off the third installment of his Bartier Bounty series, which contained 20 hard-hitting cuts and a single assist from Skilla Baby. Last week, the Detroit emcee then returned with “Bop Stick,” a Leechoppn-produced effort that sees him borrowing from Slick Rick‘s classic single “Children’s Story”:

“Bop Stick” also comes with a matching video courtesy of Dell Nie that begins with Sada Baby outside of a corner store with his crew. After engaging in eye content with a couple of women, all parties make their way to a secret function upstairs, with Sada breaking out some cool dance moves as a bevy of beauties look on.

Not too long ago, Sada Baby took to social media to give his take on fans siding with artists in the midst of rap beefs — simply put, he’s not for anyone taking sides in conflict:

“…It ain’t like no college student or 13 year old fortnite champ is gone pull a gun or seriously injure ANY artist when they see em, y’all gone point, stare, pull yo phone n record from a distance or ask for a selfie. Just enjoy our music while we here kuz a lot of that shit is serious and we’d rather y’all stream our music while we breathing than waiting until we dead to feed us NOTHING BUT positive energy.”