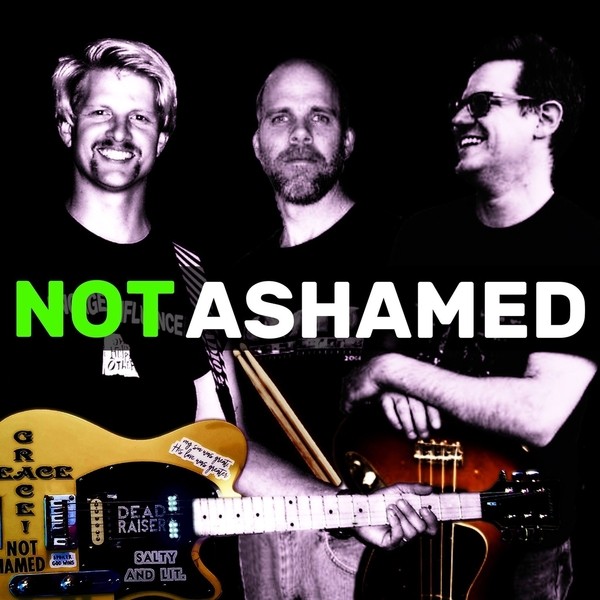 The uplifting beauty of Not Ashamed’s “In Spirit and Truth” is impossible to deny. This energetic track in the contemporary Christian style brings together different musical elements you may not ordinarily associate with music carrying this sort of message. The Irish quartet, however, never forgets that, along with conveying the song’s subject, they have an obligation to entertain listeners as well. They have all the attributes of a band enjoying great chemistry and one standing out from the others is how well they tie the song’s disparate threads together.

Rock guitar, bagpipes, folk guitar, and intricate vocal arrangements are unlikely musical bedfellows. The Irish quartet, however, sounds like an unit that you don’t tell no to. Weaving these individual players into a greater whole isn’t an easy task and it’s a measure of Not Ashamed’s talents that they make it sound easy. All the great bands do. Another thing great bands have in common is the naturalness of their best songs. Not Ashamed sounds like it happened, like a group of like-minded believers gathered in a room and spontaneously paying loving tribute to their higher power, instead of sounding like a performance plotted out to the last detail. You can’t fake it.

The bagpipes are an especially memorable touch. It is a surprise, but it doesn’t take listeners out of the moment. Many will feel a pleasant jolt of recognition when the instrument enters the track and adjusting is painless. It takes the song in another direction, yes. The direction, however, isn’t sustained and the bagpipes prove, in the end, to be one of several important stylistic twists built into the arrangement.

The vocal arrangement uses Richard Varno’s well and the backing vocals scale near-ethereal heights. Bands often become consumed with what they can add to songs instrumentally that will improve them without considering how they can improve the track by working on its vocals. There’s nothing lacking here, however. Not Ashamed has heeded that lesson and the single will dazzle listeners with its bevy of voices.

Tony Person will dazzle many listeners as well. His lead guitar defines the song’s second half without ever obscuring everything else it has to offer and accomplishes that without ever overplaying. Many other guitarists wouldn’t be as restrained. He sounds like he’s playing with the same motivation fueling him that the rest of the musicians are feeding on. It fills “In Spirit and Truth” with conviction and stateliness.

It’s a work that will bring happiness to those who hear it as well as inspire. Not Ashamed are a collection of first-rate musicians who would excel playing virtually any style but matching them with music that speaks to their faith clearly raises their game. Many will come away from this single believing they’ve only started scratching the surface of their talent and seek out whatever future releases they can. Not Ashamed is the sort of band capable of inspiring that sort of respect and, depending on who you are, potentially changing your life. That’s no small thing.