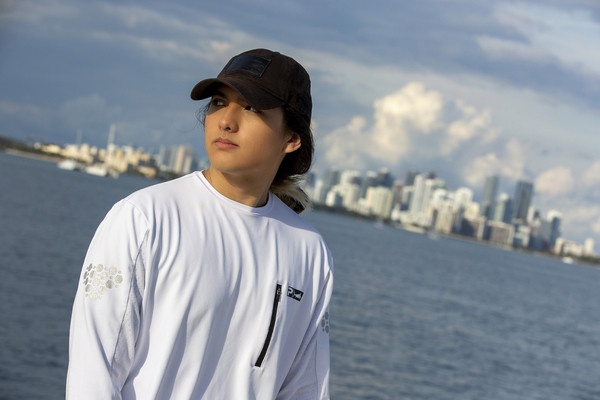 In hip-hop and electronic music, boats symbolize opulence. If you have one, chances are, you’ve got something to boast about: conspicuous wealth, status, command over the world’s most elegant form of transportation. But when you’re alone on the open surf, with the expanse of the ocean around you, a boat takes on a different meaning. It’s a place of striking solitude — which, depending on your psychological state, can either prompt celebration, encourage meditation, or elicit inner torture.

Like all South Floridians, singer and rapper DICI knows plenty about boats. They were a constant presence on the blue water of Biscayne Bay in his native Miami; now that he’s older and has had musical success, he’s in a position to score one of his own. Two million streams on Spotify, three million views of his videos on YouTube, and nearly 100k TikTok followers will do that for an artist. And it’s clear he’s got the sea on his mind: both his new single “Do What I Can” and its accompanying video are set aboard a ship. Yet the boat he shows us is not the floating party of conventional hip-hop fantasy. Instead, it’s a place for retreat and reflection — and maybe a little remorse, too.

Gorgeous moodiness is nothing new for DICI, who has been drenching his music in beautiful minor-key melody and glossy synthesizer since the beginning of his career. His breakthrough single “Shibuya” (a tribute to his Japanese heritage) and recent recordings “Will You Stay” and “u n I” are every bit as haunting as they are exciting. They’re showcases for DICI’s inimitable voice, which is simultaneously smooth and menacing, seductive and aloof, youthfully innocent and worldly-wise. He’s never communicated his unquenchable longing and his desire quite as forcefully, or with as much beauty, as he does on “Do What I Can.”

The clip for “Do What I Can” opens with a shot of a small but gorgeous yacht, gleaming white under the tropical sun. There are apartment towers in the distance, but the boat is already pretty far out at sea; part of the sky is perfectly blue, and part of it is choked by the sort of low clouds that can generate sudden downpours. As lush as the scene is, there’s a pervasive feeling of melancholy, too. DICI is alone on the boat, and he looks completely comfortable there — but he’s also lost in thought, engaged in the sort of reverie that the ocean encourages. He walks close to the edge of the deck, singing to the sunshine. As precarious as it seems, he never slips.