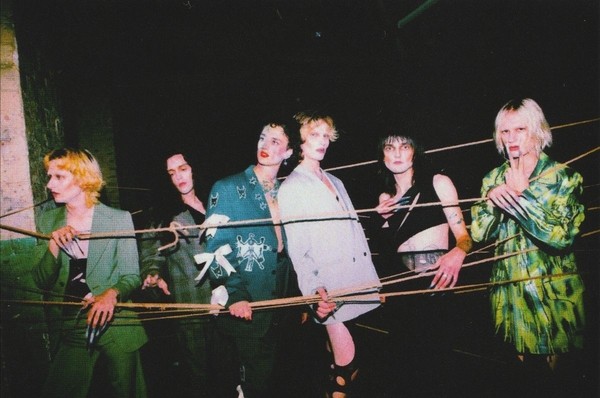 Taliesin’s new album, Faceless is set to be released in April 2022 but actually…

It was recorded between December 2014 and January 2015

It is a concept album about a serial killer with the condition known as Prosopagnosia (face blindness) who believes that his condition is the reason for why he is how he is. The character first appears on the final song ‘Simple’ on The Tally of Lies and Sin.

“Pana-vision,” borne on a hypnotic piano motif and mesmerizing refrain of “like a newborn child,” is the fourth and newest offering from The Smile a/k/a Thom Yorke, Jonny Greenwood and Tom Skinner. An animation by Sabrina Nichols of artwork from artist Stanley Donwood is also shared today to accompany the “Pana-vision” release.

From the artist: This song is about feeling unable to connect with your environment. I wrote this song as a way to express that, but not hurt anyone’s feelings. When I wrote it I imagined myself floating through crowds of people and being a bystander but never really being seen. There’s a lot of pain in that feeling but there’s also something comforting about it and a little bit cool.

Battle Symphony are proud to announce the release of their debut album, “War on Earth”, via Soman Records!

Compelling South African rock outfit, Future Radio, takes a break from Season 2 to release a Pop Punk banger titled, Sink The Ship. The song was specifically written for their Rock & Rum collaboration with Seazar’s Rum. With this out-of-album release, Future Radio once again show their innovative approach to what is currently happening in the music industry. Sink The Ship is a fast-paced, fun and catchy track reminiscent of artists like Machine Gun Kelly, Lil Huddy and Blink 182. Lyrically the song uses pirate-like metaphors and relates them to a modern-day party.

GADGETS SONS is a two piece band from Tulsa, Oklahoma that incorporates a unique blend of death, groove, and thrash metal showcasing scorching vocals and searing solos cascading over brutally punishing rhythms. Garnering attention for their earthshaking live performances the band continues to carve out a name for themselves while offering a distinctive listening experience.

Stoner metal band GRAMMA Vedetta are streaming their new single “Transmission’s On”. The song is from their upcoming release Hum of the New Machine which is out 27 May, 2022 via Mandrone Records.

“Transmission’s On” is a sarcastic interpretation of those random thoughts that pops in your head at night and keep you awake such as “you are not good enough, you ate too many carbs, you lost your job, you have to pay the rent.”

We’ve written down all those thoughts in verses, and put them on top of a chord progression that could be The Melvins covering Pink Floyd. It is a very dynamic song, with lots of ups and downs, a trippy exploration of the different personalities that our brain can create.