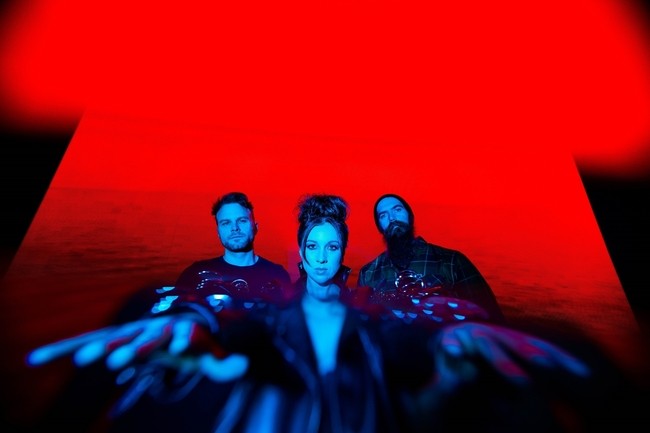 Arizona rockers Jane N’ The Jungle have soared, rumbled, and shredded their way through the Phoenix alt/punk scene. They’ve kicked up dust internationally with features on MTV, Sirius XM, a slew of radio spins worldwide, a Honda commercial, a Ford sponsorship, and, oh yeah, over a million streams on Spotify. Hit after hit, frontwoman Jordan White delivers colossal vocals that can shatter a martini glass, which combine with guitarist Brian Dellis and bassist Bryan Dague’s heave-and-punch riffs to enthrall listeners with emotional stories and gutsy vibes worth setting on repeat.

While fans and newcomers continue to devour JNTJ’s prior single “Ain’t No Other Way” (produced by Chuck Alkazian, video directed by Jim Louvau & Tony Aguilera), the industrious group charged towards the release of the Ocean Creatures EP on March 11, and here present yet another single, “Ocean Creatures.”

Driving with an almost psychedelic grit, Jane N’ The Jungle’s “Ocean Creatures” explores new territory for the established modern rock group: the spiritual consequences of physical trauma—specifically a 100mph auto collision experienced by lead singer Jordan White. White not only survived the accident (badass), she lived to muse on the astral vision it afforded: a violent moment exploding into ocean depths and cosmic conversations with alien-angels. Dellis’s lead lick shines mysterious light over Dague’s rhythmic runs that pound like bones on bumpers. Soaring and grinding, we’re transported into both the ethereal and all-too-real aspects of the wreck.

This juxtaposition of grace and grit flows into the visuals offered up by directors Jim Louvau & Tony Aguilera. Amidst kaleidoscopic strobes, White channels Bowie-borne theatrics, complete with a sequined checker blouse and astronautical facepaint. But our certified Fierce Femme bursts beyond any space oddity. She’s raw, and she’s real. There’s no denying the truth of her trauma turned to triumph, distilled here into the throbbing lights, sounds, and drama that JNTJ fans know and love.