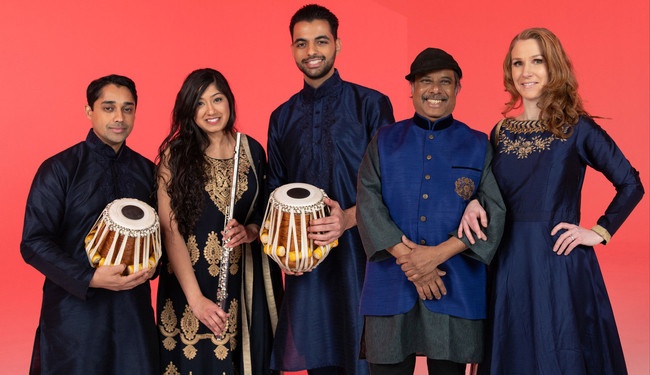 Toronto Tabla Ensemble’s new album, For The Love Of Tabla, explores feelings of love and devotion. Ritesh Das, founder and artistic director, had yet to explore the theme of love with Toronto Tabla Ensemble. Das set out looking for collaborators all over the world to help create songs that embody those feelings. The pandemic truly turned the making of For The Love Of Tabla into a labor of love. All collaborators recorded their parts remotely, from all of the world. Das’s other desire for, For The Love Of Tabla, was to make the tabla the main event. The tabla (a twin set of drums) has the habit of being lost amongst other instruments, but Das made sure to mix the songs in a way where the tabla is prominent. The results are out of this world.

For The Love Of Tabla is a mix of instrumental tracks and others with haunting vocals and vocal recitations. The tabla has a unique position in every song. Sometimes the tabla can mimic a deep sound of a heartbeat and other times it has a lighthearted quality to it. The versatile nature of the tabla is why Das wanted to begin Toronto Tabla Ensemble in 1991. Das wanted to bring the tabla to other forms of music and prove that it could be played with any kind of instrument and any kind of style. Some songs on For The Love Of Tabla lean into the classical North Indian style of music while other songs like “Spellcheck” and “Taiko Crush” are pure fusion. The remarkable and enigmatic sound of the tabla has a similar effect on the body that bass guitar has, you feel it in your bones. No matter what the tabla is paired with that magical bone deep feeling happens in every song.

One of the most unique aspects of For The Love Of Tabla is Das’s polyrhythmic vocals and vocal recitations. “Summer 2020” and “Encore 21” have some of the most prominent moments of Das’s jaw-dropping vocal recitations. “Summer 2020” is the best example of how Das uses his voice as an instrument, reciting to the beat of the tabla. The tabla and his voice work as one, pausing at the same time, creating a feeling of oneness. This pairing of voice and robust tabla gets under your skin, especially when the hypnotic rhythm of “Summer 2020” is established. “Prayer For The Mother” features haunting vocals from Bif Naked and is the only song performed in English. While “Prayer For The Mother” has a strong sense of feminine power, Das supports Bif Naked’s voice with speedy and precise vocal recitations. This causes a sense of drama in “Prayer For The Mother” that makes it utterly show stopping.

The instrumental tracks on For The Love Of Tabla are just as captivating as the others. “Baya Works” and “Nine To Ten” suck you in with the rhythmic sounds of tabla, and don’t let you go until the song is finished. The tabla has this mysterious way of drawing you in. “Nine To Ten” features a fast-paced tabla paired with violinist Raaginder Singh Momi’s enchanting strings. “Nine To Ten” is a bit more urgent than “Baya Works,” where the tabla has a deep and earthy feeling to it. These tracks are prime examples of how flexible the tabla is. Das wanted to keep the essence of the tabla while reinventing its associations, he’s done that with Toronto Tabla Ensemble.

Toronto Tabla Ensemble set out to make an album that embodied feelings of love and devotion, which is exactly what they did. For The Love Of Tabla is a spellbinding album that explores love in all its form, but first and foremost, the love of tabla. The amount of care and work that went into recording this album can be felt in all 11 tracks. For The Love Of Tabla is one of the most unique albums that is out today and its one you don’t want to miss. Fall in love with the tabla, you will not regret it!