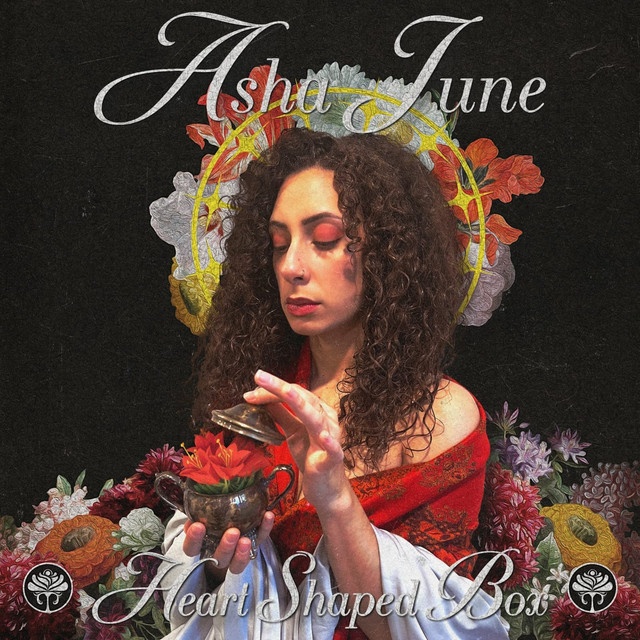 “Heart Shaped Box” is a Nirvana song it just hurts to hear. Kurt Cobain sings it with so much obvious pain in his voice. Lyrically, it’s more Gothic than the grunge style with which Nirvana was consistently associated. At the end of one verse, for example, Cobain sings, “I wish I could eat your cancer when you turn black.” I’m honestly not sure exactly what that means, but it always creeps me out whenever I hear him utter this cryptic phrase. Even before hearing this single, however, singer/songwriter Asha June reveals a whole lot of guts just taking on a song so tied to the tragic life and death of Kurt Cobain.

June’s take on the familiar song is distinctly different from Nirvana’s. She sings it with a gentle, hushed — almost spiritual tone. She’s even pictured in the artwork looking like some ancient Biblical figure. The track begins with mainly piano and layered vocals. June’s lead vocal is also significantly different from Cobain’s. Her voice is pretty, like a Laurel Canyon singer/songwriter. She doesn’t come off like the tortured woman, the way Cobain so obviously played the role of the tortured male. Rather, she’s more like a woman who is observing another woman, as the lyric addresses a female central figure. Therefore, when she sings, “I’ve been locked inside your heart-shaped box for weeks,” she sounds almost willing to be there, rather than acting like some kind of romantically trapped victim. Then when she gets to the line about eating black cancer, it sounds like she’s just trying to be a good friend. Doing whatever it takes to help somebody out of a bad situation.

Stylistically, this song sounds more like a sassy soul song, than a noisy rock tune. It suggests how the song might sound it, say, Roberta Flack took it on. All of these differences lead to the conclusion that June has transformed the Cobain song into nearly an entirely different song. And that’s why the cover works so well. Yes, artists can cover songs as homages to their musical heroes. Better still, though, is when they take something created by somebody else and make it their own. And that’s just what June has done.

It’s one thing to change a song, stylistically. It’s even more impressive when a song’s whole feel and meaning is altered by a cover version. This is what June has accomplished, which is no small feat. It’s the sort of track that makes one want to hear more music by the artist. If she has the confidence to take on a song that – in its original form – is so seemingly outside her stylistic wheelhouse, what else might she be willing to try? Just as artists in past eras reinterpreted Beatles songs the way guys like Frank Sinatra did, it would be fascinating to hear classic grunge songs (and others from the relatively modern era) revisited. It would be fascinating to get impressions to this song from music fans that aren’t all that familiar with Nirvana. They might be shocked when you tell them this is, in fact, a grunge song.

It would have never worked, though, had Asha June not been a skilled vocalist. She’s a stellar singer. It’s the perfect match of a mysterious lyric with a mystical vocalist.