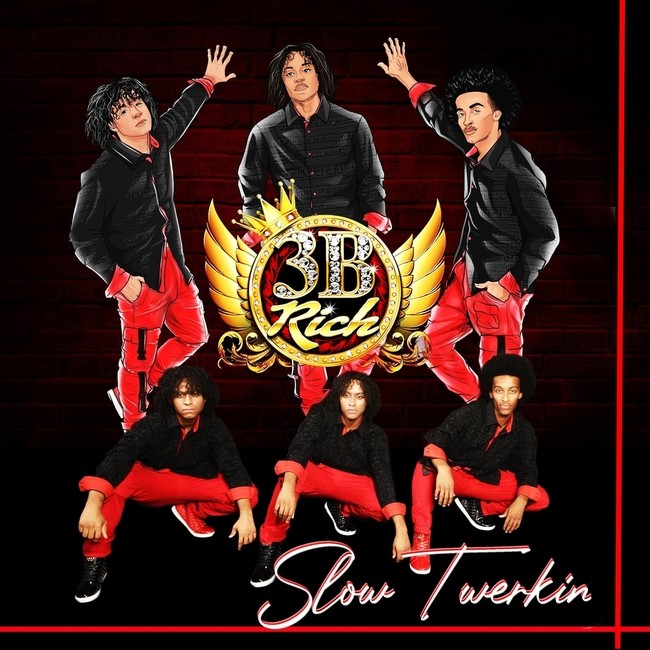 Las Vegas is a city known for its entertainment, its food, its nightlife, and more recently, its exorbitance. It’s produced some of the most auspicious, and savvy figures in all walks of life, but especially, show business. 3B Rich is an R&B/Pop/Hip Hop group who has successfully navigated the shark infested music scene of Las Vegas. They aren’t above playing by city rules, and they have paid their dues by regularly performing in local shows, currently as The Jackson 5. 3B’s ambition doesn’t peak simply by being Vegas showmen, as they are also original artists/songwriters.

The spicy slow jam, “Slow Twerkin” is the current single that will be included on the band’s eventual full-length record. It checks off all of the boxes that would certify the trio of brothers as a credible R&B act. A family affair, Hi-En, J.Royal, and Mr. Spotlight, are the siblings who comprise 3B Rich. Based on their name, it’s rather obvious that modesty isn’t their top priority, but rather runaway success. Show business is in their blood, and by evidence of their latest single, they are more than comfortable in the studio.

“Slow Twerkin” is the story of a young lady who is using her body to support herself and pay for her education. The title is rather literal, but there’s a deeper commentary on moral turpitude than it might indicate. 3B Rich is stylish and dexterous in their rendering of the piece, which has something of a hypnotic effect. The brothers have been praised for their live shows, and though “Slow Twerkin” is fittingly slow tempo, you do get sense of their dynamic. The brothers ooze confidence but they never stray too far from the song’s storyline.

It will be interesting to hear if the rest of the album is this invested in traditional storytelling, or if “Slow Twerkin” is a standalone piece. Hip Hop isn’t always known for its narrative driven premise, but R&B has been more so. If 3B Rich can bring together the best elements of both, their chances are high of finding a winning formula. Musically, and especially, vocally, 3B Rich have reached elite status. It’s obvious from the first note of “Slow Twerkin,” that 3B are young veterans.

The production on “Slow Twerkin” is without flaw. The beats are slick and the track is rife with various sound effects that enhance the vocal without distracting from it. 3B is a vocal group, so you can count on their upcoming record to showcase their range and abilities. “Slow Twerkin” is the perfect choice as a single to create some buzz for 3B Rich. It creates a few questions in regards to their artistic nature, but all of the right ones. As for the brothers, themselves, it’s easy to sense their anticipation through interviews they’ve conducted, as well as their focus and determination. They’ve made no secret as it relates to their lofty aspirations, as anything less than striking it Rich, simply won’t suffice for them. “Slow Twerkin” is now available for streaming.