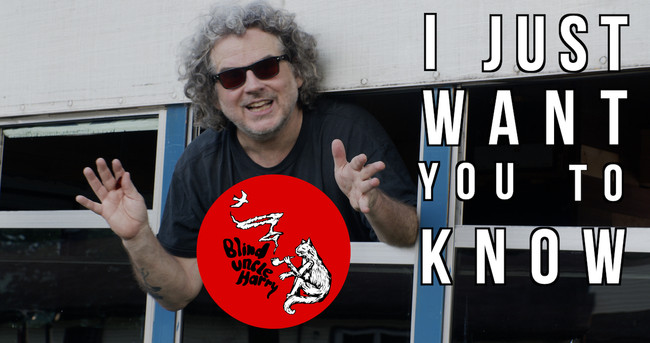 ‘Hillbilly Hippie Shreddin’ Folk Rock’. That’s how Blind Uncle Harry describes his music and it’s completely spot on. In fact, that can now be a genre in its own right as Blind Uncle Harry is back shreddin’ yet again with another folk-rock single ‘I Just Want You To Know’. What always amazes me when I get into the details of a Blind Uncle Harry track is the unwavering truth that resides in his lyrics. He’s not afraid to jump onto a soapbox about what he believes. Well, why should he when he tends to point out some poignant truths about modern-day society? This is an artist that truly has something to say, and, boy, does he say it well.

Staying true to himself, ‘I Just Want You To Know’ is a completely political track. Yet, the politics is sewn into slick guitar solos, catchy melodies and groovy guitar chords. As the name suggests, Blind Uncle Harry just wants us to know the hypocrisies hidden in the society of today and he translates these truths as he knows best — a sensational, folk-infused single. Throughout the track, Blind Uncle Harry’s unique vocals cut through the chords with passionate precision. His performance is never overbearing or overpowering, instead, he invites you to really listen to the meaning behind the words. The delicate harmonies that adorn Blind Uncle Harry’s main melodies provide a refreshing brightness to the track. They colour in the space as they sail over Harry’s singing. When it comes to the instrumentation, there’s a definite groove guiding the way in this track. The bass bounces below the thicker guitars and creates a nice movement that prevents any stagnation in the soundscape. String lines swing in with infectious energy throughout the track; there are some beautiful moments of ornamentation and stretched out melodies that melt into the main body of the music. In true Blind Uncle Harry fashion, the guitar solo that swoops in is an energetic highlight of the track. ‘I Just Want You To Know’ could have easily fit right in with Blind Uncle Harry’s debut album ‘The Gospel According To Blind Uncle Harry’ and that’s what makes this artist such a force to be reckoned with. Blind Uncle Harry has perfected his passionate ‘hillbilly hippie shreddin’ folk rock’, he knows what he wants to say and he’s not afraid to say it. Listening to this track is akin to taking a spoonful of sugar to help the medicine go down.

Listen to I Just Want You To Know on BANDCAMP