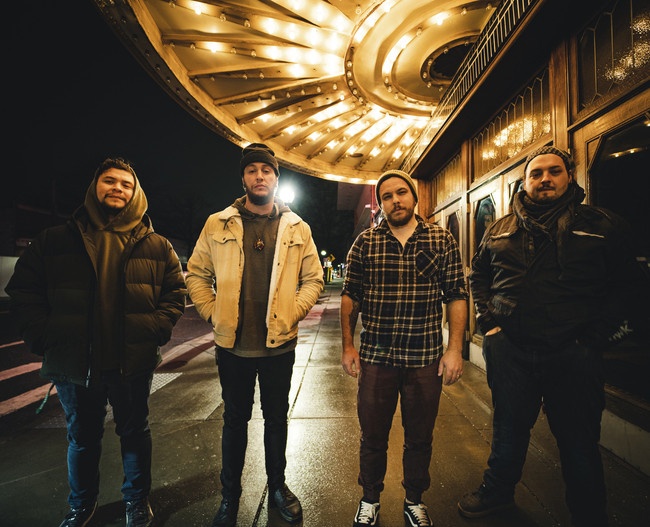 Sometimes a feeling becomes so powerful that it becomes psychedelic. It pulls the possessor of the emotion into a kind of altered, febrile, dreamlike state. If you’re in proximity to someone overwhelmed by feeling, you might catch some of those hallucinatory vibrations yourself. Singer Cody Kohler of Long Island rock band An Old Friend isn’t afraid to be a conduit of mighty emotional forces: when he sings, he allows himself to be swept away by a torrent of sentiment, and he expects his music to have the same effect on his listeners. Nobody goes to An Old Friend for a superficial experience. This music is immediate, intense, rapturous, and so drenched by feeling that it’s positively otherworldly.

“Flower Glass,” the latest An Old Friend single and a teaser for an album to come, captures the band at its most transcendent. Once again, the group has made music that feels familiar but which defies easy classification. Fans of adventurous emo, atmospheric post-rock, mesmerizing modern prog, and anthemic ballads will all find plenty to love here. But the four members of An Old Friend pledge allegiance to no formula. They’re going where their emotions take them — which is, more often than not — straight into the heart of the storm.

In unsparing, poetic language, the single describes the experience of sensory and emotional overload. Kohler’s narrator is at sea, caught in the waves and the tides, and overwhelmed by the immensity of what he’s experiencing. “Flower Glass” is addressed to a compatriot who remains complacent, taking refuge in nostalgia, slumber, and the methods of the past. No such comforts are available to Kohler, who looks straight at the turmoil and tries his best to keep his head above water. That’s just how he’s built: he’s incapable of dishonesty or self-delusion. That’s refreshing, but it’s terrifying, too.

“There’s a shade of pink in the sky that we don’t know,” sings Kohler in the release of “Flower Glass.” It’s a metaphor for phenomena beyond human understanding — color out of space, in other words. Video director Tom Flynn can’t create a new color, but he certainly can enhance the senses you’ve already got. In the luminous, trippy clip for “Flower Glass,” Flynn immerses the four musicians in An Old Friend in washes of brilliant, shape-shifting color: ripples of ultramarine blue, bursts of sunshine yellow, stovetop-flame orange. The effects he uses provide texture and refract and twist the light; they’re meant to destabilize, and they do. This is a chromatic maelstrom these musicians are weathering — one generated by their own towering emotions.