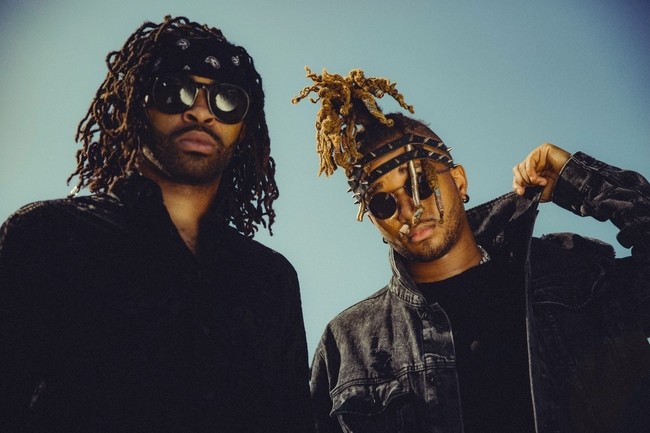 Living a lit life isn’t just about possessing expensive things. Sometimes, it’s got far more to do with being in the right place at the right time: catching the sunlight as it illuminates the side of the mountain, or dancing to a perfect beat, or connecting with your best friends. There are plenty of signs of opulence in the video for “LITLIFE,” the latest single from Selfish Ways — flashy cars, crisp new clothing, scenes shot in a glorious mansion in the Southern Californian hills. But if you ask the two rappers themselves, they’ll tell you that all of that stuff is wonderful but secondary. The real sign of the lit life is the chemistry between them, and their two girlfriends, as they make Los Angeles their playground.

The soundtrack comes from a modern master beatmaker. “LITLIFE” is a collaboration between Prince Riley and King Riley, the two South Carolina-born brothers who constitute Selfish Ways, and the Cuban-born, Miami-based, Latin Grammy-nominated producer MAAHEZ. All three artists have always been interested in erasing boundaries and forging transcultural connections, and they’ve outdone themselves with a track that effortlessly straddles hip-hop, club music, and island soul. “Lit” implies brightness, and electricity, and clarity, and wide-open vistas, and this track is a beam of pure sunshine on a warm-water wave.

It’s no exaggeration to call MAAHEZ one of the architects of the current pan-Caribbean sound. He’s one of the main men behind moombahton, the blissed-out fusion of tropical beats and urban grit that set the clubs aflame in the mid-teens. The vocalists in Selfish Ways have impressive track records, too: they’ve shared stages with Yo Gotti, T.I., Waka Flocka Flame, 50 Cent, Gucci Mane, and many other rap legends. “Been Here,” their 2020 collaboration with Riggi and Piros, is an exercise in relaxed confidence. They don’t have to strain to live the lit life — when you’re this talented, it comes naturally.

Castro Tarantino’s clip for “LITLIFE” is set in one of the world’s most lit places: Venice Beach in Los Angeles. Prince Riley, King Riley, and two beautiful companions stroll the boardwalk and the skatepark on a day so sunny and brilliant it almost seems supernatural. Later, they’re joined by MAAHEZ for a trip to 777 Sarbonne Road in Bel-Air – one of the area’s priciest spec homes, with an asking price of $87,777,777. Seven is a magical number here; the triple sevens in both its address and price tag are just the beginning, as many of the home’s architectural details were designed in measurements that are multiples of seven. The crew take a dip in a spectacular swimming pool overlooking Los Angeles after dark. An irony that isn’t lost on these connoisseurs of chill: things are never more lit than they are when the sun goes down.