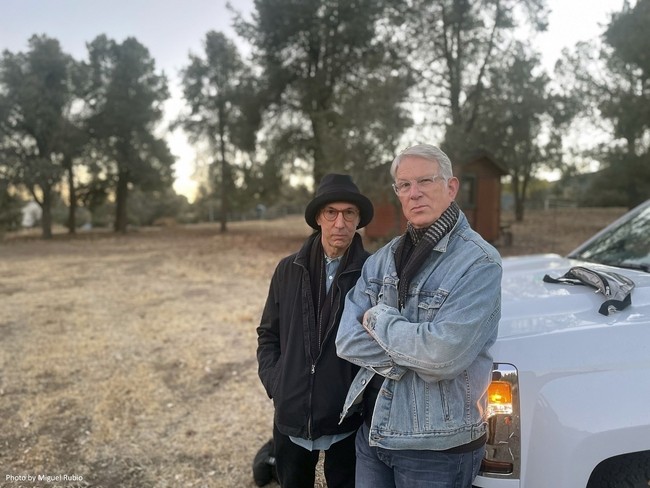 Some stories are too powerful and epic to be contained by a single song or video. Themes bleed across their albums, disregarding the barriers between tracks. Their characters make the leap from song to song, recurring, haunting the audience, drawing listeners deeper into the universe of associations that the music creates.

Foundry Town Survivors tell tales like these. Mark Tomorsky and Tommy Johnsmiller are expert short-story writers and accomplished musicians. They know how to bait a narrative hook, develop their protagonists, generate sympathy, and – of course – how to break your heart. In “Mississippi Rising,” their engrossing 2021 single, they put the listener on the banks of a raging river and made the immensity of natural forces terrifyingly palpable. On “Hopes And Dreams,” their latest, Foundry Town Survivors confront something even scarier: unchecked human desires.

Yes, once again, Tomorsky and Johnsmiller have brought desperate circumstances alive for their audience. This time, however, the characters involved have no one to blame but themselves. “Hopes And Dreams” is a caper story — but it’s more than that, too. It’s a tale of ambition, frustrated hopes, fears of aging and irrelevance, and the dark lure of transgression and adventure.

What the words don’t say explicitly, the music articulates clearly. The band matches the lyrics with music that simultaneously reflects grandeur and destabilization. There’s a longing in each note, and hunger and urgency in each beat. “Hopes And Dreams” is reminiscent of classic rock, but there are notes of bewitching psychedelia and plainspoken Americana in the mix, too. The Foundry Town Survivors crown the song with a slide guitar solo that firmly anchors the song in the roots-rock tradition — even while blasting off to the stratosphere.

To bring “Hopes And Dreams” to life on screen, Tomorsky and Johnsmiller have turned to a frequent collaborator: Paul Crowder, a filmmaker whose sense of drama and story-craft matches theirs. He shows us the stretch of desolate highway, the surreptitious shots of characters engaged in nefarious activity, the intimations and threats, and the sudden eruption of violence. He’s also handy with hallucinatory images, including mirages of Las Vegas that shimmer across the desert-like dangerous mirages. But just as important are the things he doesn’t show us, including the characters’ motivations and ultimate destinations, and the consequences of their desperate acts. For that, we’ll have to wait for the sequel — and the one after that, and the one after that…