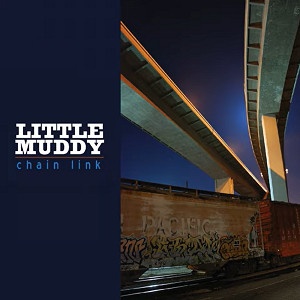 If you’ve been in need of smooth listening, you can’t miss Little Muddy’s latest album Chain Link. The sixth album from the San Francisco based instrumental group effortlessly shows off the groups talents. Headed by master guitarist Rich Goldstein, Little Muddy takes new form on Chain Link. In the process of seeing where he could take Little Muddy, he found a new sound for the group (or at least for this album). Goldstein found a happy medium between dark and gritty tones of the past and modern compositions. Making Chain Link one of the most evocative albums I’ve ever heard.

I want to focus on two of Chain Link’s most thematic songs “Triple Agent” and “Satellite Spy.” Both songs are described as spy-rock and both are based off titles Goldstein had “lying around.” These two tracks highlight Little Muddy’s ability to capture themes and feelings effortlessly. “Triple Agent” has darker tones that are brought on by the track’s rich bass and lingering distortion. “Satellite Spy” uses distortion to creep under your skin before it takes you on a more mellow spy-rock journey. Both of these tracks exude creativity, amplifying Goldstein’s vision for where Little Muddy can go (which is anywhere). Although these songs deviate from the relaxed nature of Chain Link, they don’t feel out of place on the album.

From beginning to end Chain Link takes you to a higher realm. It doesn’t shy away from the emotions the instruments can elicit, instead, Little Muddy leans into them. There is no fear on this album. There is only an array of idea’s, emotions, and tempos that converge to make Chain Link so ethereal. Little Muddy knows that they can trust the instruments to do the talking. Goldstein often pushes his guitars in ways I didn’t know was possible. While Little Muddy favors distortion it is always well defined and never overpowers the song or gets old. Little Muddy proves that they can manipulate the acoustic guitar to be just as atmospheric on tracks like “In The Distance You’ll See” and “300 Years From Now,” which expands where Little Muddy can go in the future.

One of favorite aspects of Chain Link is how moody yet universal it. Little Muddy didn’t hold anything back with Chain Link. Every song is so pregnant with feeling that you are automatically reunited with some lost memory or an enchanting emotion. Throughout listening to the album old memories and experiences resurfaced as certain songs reminded me of how I felt in those moments. “Slow Time” is a sun drenched song that is so breezy your immediately taken back to some happier time. None of these songs make you feel bad, although they stir you emotionally none of them bring bad feelings to the surface. Instead, Little Muddy masterfully captures those profound and inexplicable feelings, bringing them to life. Chain Link is an album that slips its fingers into your psyche and doesn’t let go.

Little Muddy gives listeners atmospheric and mesmerizing music on Chain Link. The group pushed themselves to see where their sound could go and it is downright magical to listen to. This is an album that flows so well you’ll want to play it on an infinite loop. Check out Chain Link, out now!