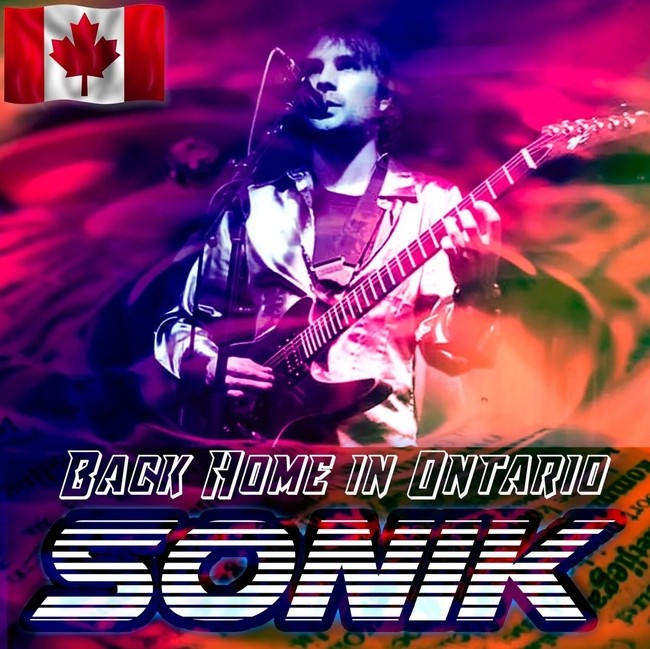 Big guitars, bigger harmonies, the constant sense of urgency coming off of The Sonic Memes’ collective wallop; in the new single “Back Home in Ontario” by SONIK, there isn’t as much focus on contemporary trends as there is the foundational elements that made rock music so exciting in the first place, and for purists like myself, this is overwhelmingly good news for the genre. As a lot of underground American players have started to drift towards a more diversely-appointed style for making alternative music, SONIK is someone who has an interest in keeping the legacy of the old guard alive, and that’s quite obvious when listening to his debut single.

Although there are moments where “Back Home in Ontario” plays by the rules of a post-grunge world, it’s got plenty of instances where its aesthetics are borrowed from ‘70s arena rockers, the best of whom knew how to organize a smart harmony amid inelegant distortion and enormous riffs. This artist is out to pay homage to his homeland the only way a true rocker knows how to, and that’s by cranking up the volume and layering some of the sweetest string play – electric and acoustic the same – you’re going to hear out of his scene this month.

The way this song was constructed really maximizes the fluidity of the verses and makes it so we never feel lost against the beat. If anything, there are numerous points at which it’s hard to tell who is driving the groove here; is it the drums and The Sonic Memes, or is it in fact SONIK himself, controlling the rhythm element with little more than his lead vocal and the charisma it exudes. The answer doesn’t matter in the grander scheme of things, as by the midsection of “Back Home in Ontario,” it’s clear that the chemistry between both parties is too strong to make details more significant than the decadence they yield.

These guitars are always loud and proud, rejecting the insular tones that a lot of minimalist and surreal pop/rock acts have been producing in the past couple of years, and while the vocal layers are pretty bold later on in the track, they’re not cosmetic in nature. They’re contributing something to these lyrics, as is every other part of the song.

I didn’t know anything about SONIK or his band ahead of hearing some buzz surrounding “Back Home in Ontario” just recently, but I can understand why there’s been as much interest in his music as there has been leading up to his official debut. He’s got a lot of talent that he’s bringing with him into the recording studio, and stacked with the skillsets of The Sonic Memes, it makes this performance sound like it’s coming from a vet rather than someone trying to make a splash as a solo player for the first time. It will definitely be fun to hear these guys live, but until then, their rookie release together gives us a good idea of what to look forward to.