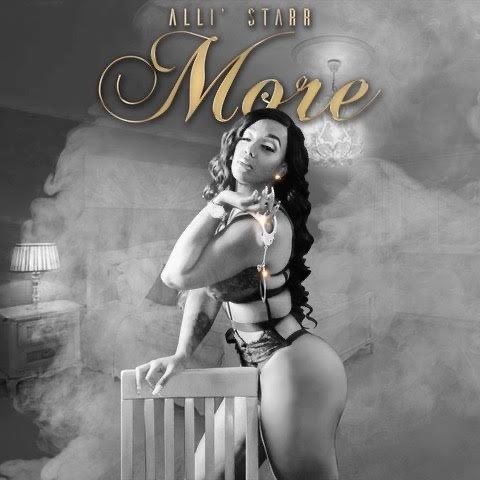 Video directors love the desert. Musicians do too. In the sandy expanses, the horizon seems to go on forever — there’s no impediment to the imagination and nothing to get in the way of a waking dream. It’s a wide-open space, perfect for the projection of fantasies, and Alli’ Starr’s desert scenario is a realization of some of her wildest desires. In the video for “More,” the R&B singer and her female friends have four muscular men blindfolded and bound to stools, entirely at the mercy of the women. (And let’s just say, nobody seems too upset at this arrangement.)

The imagery in the clip is a logical extension of Alli’ Starr’s persona. She’s a woman in control, bent on personal satisfaction, and determined to get what she wants. Alli’ Starr appears in black, and when she swings around her long braid, she’s the human embodiment of a whip. Then there’s her singing voice, which carries authority even when she’s just telling you her cravings. She’s simultaneously sultry and cool, inviting and commanding – and she always lets you know exactly where she stands.

Producers Tyler Gaston and Tiana Shai have given Starr a marvel of a beat to sing over: a slinky, sultry, relentless track tailored to the club and late-night reveries. Skittering trap drums, sighing backing vocals, deep, throbbing bass and synthesizers that hiss and purr: everything about “More” is designed to draw you deeper into the singer’s web of erotic associations. But the song, irresistible as it is, is only a taste of what the star can do. Situationship, her upcoming EP, puts her flexibility, versatility, and ambition on display and leaves no doubt about why she’s been selected as a backup singer for artists as varied as Phil Perry, Bobby Womack, The Ohio Players, Barbara Streisand, and more.

As a Las Vegas-based artist, Alli’ Starr is extremely familiar with wide horizons. She knows all about the endless possibilities of the big sky and the excitement of a blank canvas. In the “More” clip, she’s the queen of the desert, decked out in stockings, an outrageous dress, and black jewels affixed to her face; when she approaches the musclemen, she does it with swagger and absolute authority. It’s all a reminder that Alli’ Starr is an actor and dancer as well as a top-notch R&B singer, and when she and her partners step into formation in the middle of the road and begin to move, the sunny landscape catches fire.