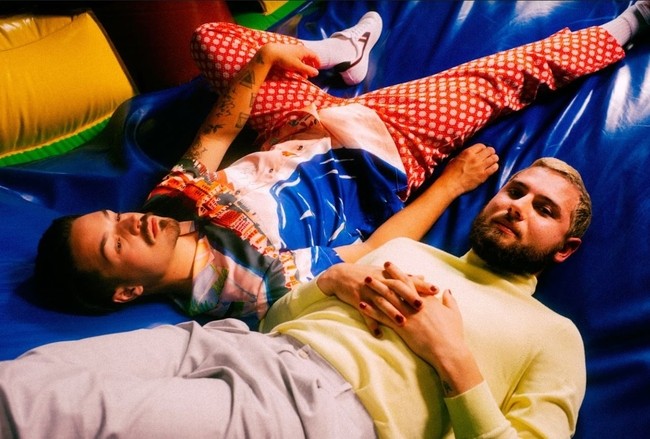 Some songs are too good to be forgotten. Most pop fans associate “Tainted Love” with Soft Cell, the UK synthpop duo that took the tune to the top of the charts in 1981. But Gloria Jones’ “Tainted Love” was a Northern Soul hit years before Soft Cell refashioned it into a moody new wave anthem. A classic tune was redone in the style of the time — and the world responded. Forty years after the Soft Cell cover, another European group is up to something similar and similarly irresistible. Berlin’s effortlessly winning Milky Chance have updated “Tainted Love,” and they’ve done it with the wit, grace, and vibrant color that characterizes all of their recordings.

And how have they brought the song into the 21st century? Well, they’ve done it by making “Tainted Love” sound very much like a Milky Chance original. Fans of prior Milky Chance hits like “Cocoon,” “Stolen Dance,” and recent alternative smash “Colorado” will be right at home here. They’ll instantly recognize the rubbery, insistent, quick-picked bass guitar, the scratchy six-string and gorgeous, decorative synthesizers brightening the corners of the mix, and the feather-light vocals telling a tale of obsession and longing. In short, the cover has the same delightful, infectious characteristics as the other tracks on Trip Tape, the duo’s surprise-released collection of new material, covers, rewrites, rare tracks, sonic experiments, and marvelous pop-rock pranks.

Milky Chance’s clip for “Tainted Love” is crisply shot, playful, endlessly rewatchable, and, above all, tremendous fun: a love letter from musicians who make their affection for their listeners manifest in everything they do.

The “Tainted Love” video follows Milky Chance frontman, Clemens Rehbein, exploring a creepy – but oddly gorgeous – apartment building. The front of his shirt is stained with blood, but he doesn’t seem too distressed about it. He’s consumed by his pursuit of a person in a wolf costume, who darts between doorways and leaps out of the shadows. It’s whimsical but a little spooky, too — which is also a pretty good characterization of Milky Chance’s music.