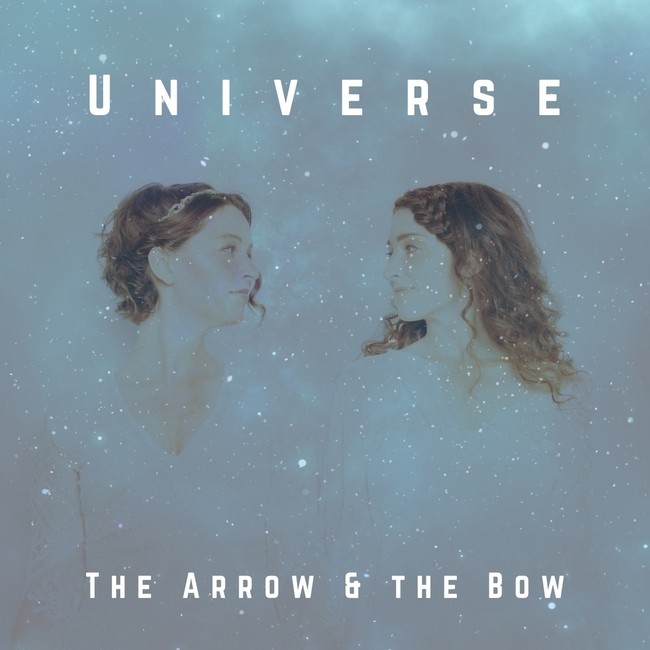 Before we begin, I would like to thank you for taking the time to answer a few questions and update our readers about your latest endeavors. For starters, please introduce yourself. Who is The Arrow and The Bow?

The Arrow & The Bow is Hillary Reynolds and Hannah Lou Woods, two acclaimed singer-songwriters, who joined forces on a musical journey to explore the healing and heart-opening power of music, yoga, meditation, and travel. The type of music we make is what could be called “indie-fairy-folk-pop.”

Being talented musicians in your own right, how did The Arrow and The Bow become the duo that we know today?

Hannah: Hillary and I were back in Boston, both attending Berklee College of Music, and we’d become friends. We were hanging out one day and Hillary said she really wanted to travel to Ireland, and I said, “well I really want to go to Scotland.” And then we decided we’d travel to those countries together. Then, we had the idea that it would be fun to play some music while we were there, and we started to book ourselves a tour. It ended up being this very healing and heart-opening experience for us, and we ended up writing some songs together about that journey of healing, self-awareness, and growth… and that’s how we became The Arrow & The Bow.

Back in 2016, The Arrow and The Bow released their debut EP. Can you tell us what were some of the factors leading to the recording of this project?

Hillary: We took the inspiration from our Ireland/Scotland tour and used that magic to record our EP in Boston at Ugly Duck Studios. We knew we wanted to release an EP not only as a way to connect with fans, but also have a time capsule of our collaboration.

What were some of the things that you learned about music from the work that you have done together?

Hillary: I think we learned to trust our instincts in the studio, and we pushed ourselves to explore new sounds, and continually tried new sonic landscapes. I also learned how important it is to run with ideas without having attachment to the outcome – sometimes things work, sometimes they don’t! What matters is trying.

Hannah: When we first started this project, I had been quite focused on my solo work. It was SO fun to be able to step into a collaborative space with Hillary and create something different than my previous work. It opened me up to seeing more possibilities, and that there really are infinite possibilities of ways to create music and express yourself. The joy of co-creating something beautiful with another soul is priceless.

Five years have passed since the release of your self-titled debut album and now you are on to a new single titled Universe. How was It to work together again after all this time?

Hannah: It feels like we didn’t miss a beat, like we picked up right where we left off, like the timing of everything is exactly as it needed to be.

The new single Universe has an awesome sound that carries an intense amount of depth. How did the single come together?

Hannah: This song got its start in the deserts of Sedona, AZ. I was sitting underneath a juniper tree, crying, feeling overwhelmed by huge waves of self-doubt about my path, how to do this music thing without sacrificing who I am, etc. I started to draw in the dirt, and began making art from nature. It helped me shift and remember that I’m here to create, not to dwell in self-doubt. I got up and started walking, breathing in the beauty of the mountains, tapping a rhythm on my chest, tears pouring down my face, and then the words/melody “Universe, Universe, won’t you help me believe in my soul” came through. The song helped me process that emotion, and gave me courage and support to feel my inner strength and keep going.

I brought the song as it was into the studio with Hillary back in Boston, and she gave it more wings and life really helped the song bloom into a fuller expression with her artistry and spirit and magic. We also enjoyed adding the different drums and percussion sounds, and crafting it with Dave Chapman our engineer/co-producer to build the track and all of its layers.

What was it like to work with each other again after what some would call a five-year hiatus?

Hillary: Refreshing, and natural. After five years of not working together, we both felt drawn towards “Universe” earlier this summer. The team seamlessly came together to release the track and we took it as a sign to finally release it into the world.

Your music is wonderfully infused with a sense of spirituality. How does spirituality relate to some of your musical themes?

Hannah: Thank you so much for this lovely question! I think to be ‘spiritual’ is really to explore what it means to be a human being/consciousness at this time, to be willing to go on the journey of asking those deeper questions: who am I, what am I doing here, what does all of this mean? Music is such a wonderful way to explore those questions, providing more depth and layers to the expression than just words alone, and the answers of course are ever-evolving.

Hillary and I started writing just for fun, to play and express ourselves, and we allowed the words and music to sort of bubble up and come through, not forcing it into being, just exploring. What comes out tends to lend itself towards things that may be considered more ‘spiritual.’ But it’s just sort of what ends up coming out as a result of being willing to allow that deeper inquiry, to flow, to let go of the mind’s agenda to have to make the song a certain way, (i.e. more catchy, marketable, etc.) Our music tends to be more about diving into who you are in that moment and what wants to be expressed through you, whatever that is. In this way, the music can become a reflection of that moment in time, a sort of sonic diary.

I think the more willingness you have to be real and honest with yourself, the more likely you can create a song that is an authentic expression of who you are and what you feel in that moment, and the song can also help you become more aware of different aspects of yourself, or release / process deeper emotions; the music can become a place for that transformation and catharsis. This is sort of my attempt at describing though what in essence is really actually very mysterious. I’m always like, where do these songs actually come from??? How did nothing suddenly become this beautiful something, this curious sound, this reflection of my heart in this moment in time? Mystery!

What can we expect to see from The Arrow and The Bow in the near future? Any final thoughts?

Hillary: I currently live in LA and Hannah lives in Minnesota. We’re going to be producing and recording new music long distance in the new year and will share our next single when its ready!

For more information about The Arrow and The Bow visit https://www.hannahlouwoods.com and https://www.hillaryreynolds.com.